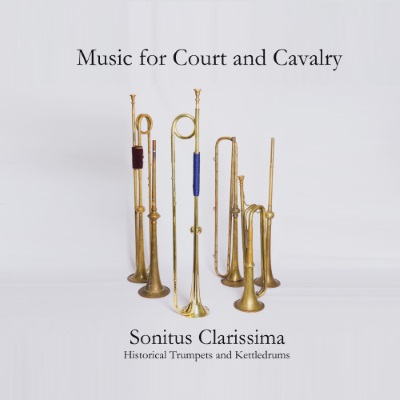 Sonitus Clarissima (Latin for “Brilliant Sounds”) is aptly named. This new ensemble is comprised of a group of wonderful virtuosos. Their inaugural CD has a program of a nice mix of some little-known repertoire with that of a few of the natural trumpet “standards”.

They use instruments at several different pitch levels, beginning with an anonymous four movement Serenata (1792) in C (played at A=415hz). Sonitus Clarissima performs the rousing piece with “brilliant sounds” as well as wonderful ornamentations. Three seldom-recorded fanfares by Richard Wagner are an interesting glimpse into a much later era. These pieces are quite conservative in nature, harkening back into the trumpet tradition. It is interesting to note how the great innovative use of chromaticism by Wagner was not even attempted in these fanfares. The Wagner fanfares are performed by Hawkins, Wallis, Johnson, and Veverka in D at A=440. Four Intradas by Nicola Matteis are standard fare, but impeccably performed as are the dance movements from Handel’s Atalanta. Two little known and seldom performed pieces add to the program; Freycinet Marche by Jules Cerclier (1823-1897) and the Fanfare for 4 trumpets by Eugene Roy (1790-1827).  The Cerclier March is performed by Dovel, Wallis, Johnson and Veverka and they play this piece in modern D. The fanfare by Roy is performed beautifully by Dovel, Hawkins, Johnson and Wallis and this piece is played at modern C. Four duets by H.I.F. Biber (1644-1704) again are beautifully performed by Foster and Dovel and they employ a wide range of ornamentation. While not indicated in the music Sonitus Clarissima chose to add timpani to these trumpet duets to a very effective end.  Also, in the more well-known area of the trumpet repertoire Polonaise by JE Altenburg (1734-1801) is splendid. The performers on this piece are; Foster, Dovel and Wallis and they perform it baroque C pitch.  John Foster made an interesting choice in his arrangement of the Sonata de Reposta by Girolamo Fantini (1600-1675). This piece exploits the dynamic as well as shift of range. While not indicated in the part, Foster chose to use two trumpets to play this single line, an open trumpet followed by a muted trumpet. Again, a device that is used to a very effective musical result. Foster and Dovel take the honors on the first two parts and they play at baroque D pitch. These duets are played on ventless trumpets due to the use of the muted second part. The CD programs ends with an original and fun trumpet ensemble piece by John Foster, Brahms Fantasy.

While Sonitus Clarissima has presented a wonderful first CD, their liner notes leave something to be desired. Everything in the notes covers biography information of the performers. Discussion on the repertoire, particularly source information for the music would have been welcomed. However, the performance on the CD was wonderful. Even though they have only formed as an ensemble in 2018 Sonitus Clarissima is off to a fabulous start and we look forward to future recordings and performances.

Editor's note: those interested in Cerclier's marches can find more informtion in the edition of his 30 extant marches for four trumpets published in 2005 by Editions BIM by clicking here.