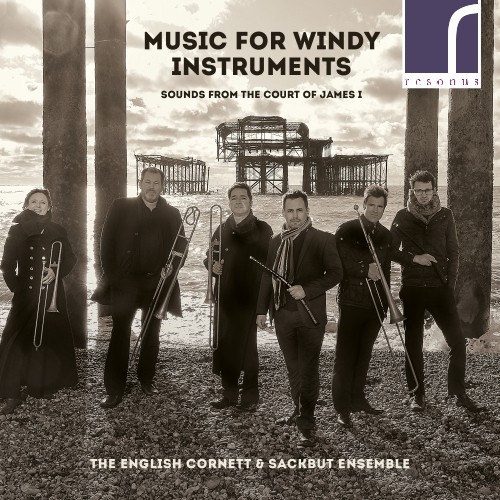 This recording marks the 25th anniversary of this fine ensemble and is a wonderful marriage of performance and scholarship. All the repertoire on this CD comes from the so-called “Fitzwilliam Wind Manuscript” an important source housed in the Fitzwilliam Museum in Cambridge (Mu. MS 734).

There has been on-going discussion by scholars as to the type of ensemble that would have performed these pieces. In fact it led me to re-read Ross Duffin’s “Cornets & Sagbuts: Some Thoughts on the Early Seventeenth-Century English Repertory for Brass,” originally presented at the HBS’s first International Historic Brass Symposium at Amherst in 1995 and subsequently published in the HBS Bucina series Perspectives in Brass Scholarship (ed. Stewart Carter, Pendragon Press, 1997). Duffin’s paper discusses in detail the Fitzwilliam manuscript and makes a convincing claim that this was repertoire for the Royal Wind Band from the Court of James I.  (1566–1625). In his liner notes for the CD, Peter Holman concurs with that view.

The ECSE play a wide range of cornets and sackbuts which results in a glorious range of colors. The ensemble uses cornets by makers Paolo Fanciullacci, Christoph Schuler, Matthew Jennejohn, Serge Delmas, Roland Wilson, Damien Bardonnet, and Nicholas Perry. The sackbuts played are by Egger, Ewald Meinl and Frank Tomes.

The ensemble playing is exquisite throughout. The ornamentation adds a lively and dynamic touch to their enthusiastic performance. No one player stands out, as this is an ensemble of all virtuosos. It is a fine recording to mark the English Cornett & Sackbut Ensemble’s 25th anniversary. Wow, 25 years. At this risk of sounding like an old codger, it seems like yesterday when the ECSE were the new kids on the block. Ross Duffin and Peter Holman make convincing arguments that this wonderful repertoire is for a wind band. To put a twist on the old proverb, “The proof of the pudding is in the eating,” the English Cornett & Sackbut Ensemble proves that this repertoire is indeed music for wind band by their spectacular and convincing interpretation and performance. A worthy musical conclusion to a scholarly conjecture!