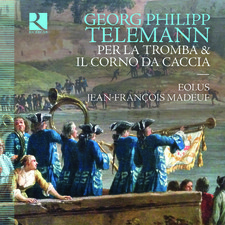 In its first recording, Ensemble Eolus has released a disc celebrating repertoire by Georg Philipp Telemann and his contemporaries, and specifically music that features trumpet and horn. Eolus was the god of the winds, and this ensemble features specialists on historical wind instruments. In the liner notes, the group emphasizes its desire to accurately recreate the sound of Baroque music on historical instruments, which this ensemble specifically seeks to do by not using vent holes or hand stopping. The ensemble explains that they also wish to recreate “all of the original flavour of the music’s regimental and military origins.”

The disc opens with Telemann’s Suite in F Major (TWV 44: F16) for two horns, two oboes, and bassoon. It is one of nine pieces written by the composer for infantry regiments at the time. Commencing with a French overture, the ensemble executes the first movement’s dotted rhythms with pinpoint precision. The work’s final movement, “Fanfare,” concludes the work in virtuosic fashion at mercury speed.

Three works on the disc include natural trumpet: an anonymous Suite in E-flat major, Telemann’s Concerto in D major (TWV 43: D7), and Telemann’s Air de trompette in C major (TWV 41: c1). In the Suite, the natural trumpet’s sonic profile is of a reedy quality, which blends seamlessly with the oboes and bassoon. In the rather well-known Concerto in D major, this color has the almost opposite effect: the trumpet’s reedy clarino contrasts the silky orchestral strings and sets the solo line apart distinctively. In the one-minute Air de trompette, Madeuf showcases his flexibility and technique, skillfully weaving harmonic trills into the melodic line.

The final work on the disc is Telemann’s March in F major (TWV 50: F43). It possibly was commissioned from Telemann for some official event, as an example of regimental music of the period. The drum part, while improvised rather than notated in the score, is essential as it set the rhythm for the soldiers’ steps. To this reviewer, this work is well placed on the disc, as it captures the regimental flavor of the entire disc in fitting summary.