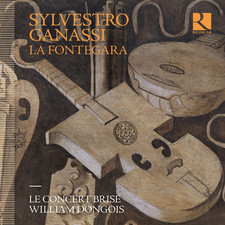 Silvestro Ganassi (1492–1565) holds a special place in music history as having written the first in a long line of treatises on diminution in his La Fontegara. It was published in Venice in 1535. This wonderful recording is an outgrowth of a scholarly research project, lead by William Dongois, for the Haute Ecole de Musique of Geneva. In Ganassi’s own words, “Diminution is nothing except an ornament for the counterpoint.” The principal aim of the treatise was to facilitate the imitation of the human voice on instruments. Ganassi was among a number of renowned piffari in Venice for the Dodge and a member of Scuola Grande of San Rocco.  His years of service for the Doge coincided with the period that Adrian Willaert was maestro di cappella of the Basilica of St. Mark.

This recording is comprised of a program of composers contemporary with Ganassi. The recording has 18 pieces all of which are highly ornamented using Ganassi’s diminutions drawn from La Fontegara as a basis. Given the unusual rhythmic patterns not only based on values of 4, 6, 8, 12, 16, and 24, but also on 5, 7, 10, 14, 20, and 28, musicologists have considered La Fontegara to be more a theoretical treatise than a practical manual. However, hearing Dongois and the other members of Le Concert Brisé play these divisions it is clear to this listener that it was not only a theoretical work.

They perform five anonymous dance tunes and one by Pierre Attaingnant and employ percussion and a full complement of the ensemble. As with every piece on this recording these dances are highly ornamented using figures from La Fontegara as models for the improvisations. A major aspect of the research project was to explore the use of the Ganassi embellishments in polyphonic compositions. Le Concert Brisé performed a number of Renaissance masterpieces including Mille regrets and Douleur me bat by Josquin, Fortuna desperate by Busnois, Gombert’s Mort et fortune and Dezilde al Caballero, Sacro fonte by Willaert, Italia mia by Verdelot, Tromhoncino’s Zephyro spira, Per dolor by Marchetto Cara and Anchor che col partire by Cipriano de Rore.  Not only were the compositional lines embellished with virtuosic Ganassi examples but purely improvised lines were being playing by one or more instruments while the unembellished line was being played at the same time.  William Dongois had a dominant role improvising with breathtaking virtuosic lines on the cornetto. However, the entire ensemble played with flawless precision and imagination. This recording could constitute a graduate level class in Renaissance improvisation all by itself. A spectacular recording.