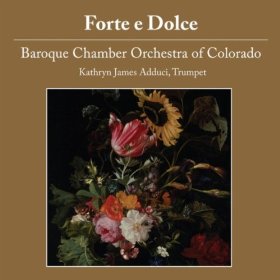 Forte e Dolce is the second recording issued by the Baroque Chamber Orchestra of Colorado on their own self-published label and is available digitally for download on Amazon, iTunes, and elsewhere. Given that more than half of the CD’s tracks highlight the trumpet, it might be better thought of as a solo album featuring Baroque trumpeter Kathryn James Adduci (playing a 2006 Egger instrument modeled after a 1748 Ehe III instrument).

The trumpet works included here will be well known to all: Franceshini’s Sonata for Two Trumpets, Torelli’s “Etienne Roger” Concerto and Sonata G. 7, Stradella’s Sinfonia Avanti Il Barcheggio. Adduci’s playing and interpretations have a great deal of merit from both the technical and artistic perspectives, and although recordings of these works are frequently seen her interpretations stray just far enough from “standard” to warrant hearing. In the opening moments of “Etienne Roger,” for example, she presents the famous leaping subject in far more a legato style than others, an artistic decision requiring more than the usual amount of technical prowess. The remainder of the movement follows suit. One might presume that her chosen repertoire would offer Adduci limited opportunities for virtuosic displays, and while this is true for the most part, there are noteworthy flashes. The most impressive is the extended chain of trills concluding the third movement (“Canzone”) of Stradella’s Sinfonia, which insofar as my ear is concerned is flawlessly executed.

I found myself to be particularly impressed with Adduci’s ability to manipulate the tone of the instrument via articulation. Of course she captures the spirit of the natural trumpet in tone and timbre—apparently on a vented trumpet for those who feel strongly about such things, though the CD gives no indication either way—but on occasion (and especially in the more fanfare-like passages) she finds a way to coax a brilliant and biting, almost modern (but in a good way), sound from the instrument. I am not sure I was aware that the Baroque trumpet had such a wide variety of possible sounds given what I have heard on the recordings of others. Clearly Adduci excels in the areas of articulation and tone even as her interpretations offer differing perspectives on familiar works.

The only artistic decision I would question is the replacement of the second trumpet soloist with a violinist for the Franceschini Sonata. The liner notes indicate that this decision was made to “highlight the dialogue inherent in the piece with contrasting timbres.” To me there is a fundamental contradiction in a "historically informed" ensemble taking such liberties without some apparent historical justification (none is provided). By the same token I did not really think that the rewards justified the risk. The violin proved unequal to the task of competing with the noticeably louder trumpet and the end result, for my ear at least, was a solo trumpet work with some kind of halfway accompanimental quasi-obbligato violin part.

The non-trumpet half of the album has its own outstanding features. Generally the orchestra performs admirably both as an accompanimental ensemble and in the non-solo pieces. The recording includes chamber works as well. Violinist Cynthia Miller Freivogel and theorbo/guitarist Daniel Zuluaga collaborate on the CD’s wonderful closing track, Antonio Bertali’s Chiacona. Both performers demonstrate their skill in transforming an apparently unassuming movement into a virtuosic showcase over the course of some eight minutes.