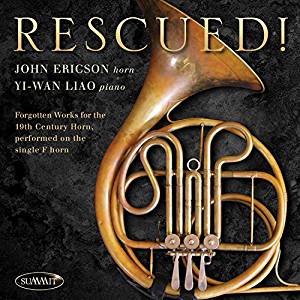 John Ericson, professor of horn at Arizona State University, is a noted horn scholar and leading horn virtuoso. He has made a special study of 19th century valve horn and this wonderful recording is the culmination of those efforts. Ericson has not only unearthed and “rescued” a number of fine but scarcely known solo horn pieces but put together a fine program emphasizing a particular aspect of the brass tradition. These pieces are part of the low horn playing tradition at a time when there was a clear delineation between high and low horn playing. The music included in this recording was composed from about 1860–1910. Low horn players during that period used the single F horn while high horn playing was done on the single Bb horn. Ericson explains in his fine CD notes that the modern double horn in F/Bb was not invented until 1897.

The single F horn that Ericson plays on this CD, made by Richard Seraphinoff, is not based on a particular existing historic instrument but instead patterned in layout after an illustration in the Kling Method. In a private communication with John Ericson he explained that having a proper period mouthpiece was a key to the recording. He played on a mouthpiece built by Tom Greer of Moosewood Mouthpieces. It is a replica of a 19th century Courtois mouthpiece. Ericson explained that he spent about four months working on upper range articulations. While the adjustment from his modern horn mouthpiece was not an easy one to make, the results were well worth it. The sound produced was decidedly not a typical modern sound but one most appropriate to the period of music.

Ericson’s program consists of solo horn works with piano accompaniment. These are not household names but the composers on this CD program were important musicians of the period some of whom were noted performers and teachers of their day. Bernhard Eduard Müller (1842–c. 1920) is the most represented composer on the recording with four of the fifteen pieces on the CD: Nocturno, Op. 73, Melancholie, Op. 68, Am Abend, Op. 71, and Wiegenlied, Op. 69. Ericson points out that Müller played horn in the Gewandhaus Orchestra in Leipzig and is today most noted for his horn etudes. The other works include: Sonate, Op. 347 by Fritz Spindler (1817–1905), Gondellied, Op. 15 by Karl Matys (1835–1908), Lied ohne Worte, Op. 2 by Oscar Franz (1843–86), a leading orchestral hornist and teacher. Richard Strauss dedicated the orchestral score of his Horn Concerto no. 1, Op. 11 to Franz. The rest of the program consists of the Serenade, Op. 20 by Louis Bödecker (1845–99), Lied ohne Worte by Josef Richter (d. 1925), Resignation, Op. 16 by Charles Eisner (1802–74), and Sonata, Op. 7 by Hermann Eichborn (1847–1918).

Yi-Wan Liao does an admirable job on accompanying Ericson particularly in light of the demanding piano parts on many of these works.

The repertoire on this recording might not be masterpieces on the order of works by Beethoven, Brahms, or Schumann, but they are clearly solid musical expressions representative of a style and period of music history. We would be the poorer if they were lost to us completely and clearly we owe a great debt to John Ericson for not only “rescuing” a wonderful segment of that repertoire with a beautiful performance on this recording but for his important scholarly activities exploring them.