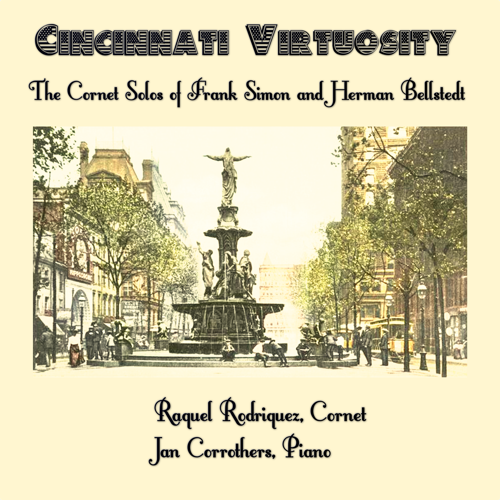 If there is a better word than virtuosity to describe the repertoire on this recording I certainly can’t think of it. Raquel Rodriquez, Assistant Professor of Trumpet at Tennessee Tech University, has done extensive research into the music and careers of Frank Simon and Herman Bellstedt. She presented a fascinating paper at the 2015 HBS Early Brass Festival on these soloists and the musical culture of Cincinnati, the city where both men lived.

The program on this CD consists of two solos by Frank Simon (1889–1967), Willow Echoes and Miss Blue Bonnet and seven pieces by Herman Bellstedt (1858–1926), Napoli, La Mandolinata, The Carnival of Venice, Fantasia No. 1, Princess Alice, Piece de Concerte, and The American Boy. All seven Bellstedt solos are available in Charles Colin’s collection Herman Bellstedt Solos Presented by Frank Simon. This publication contains a short essay on Bellstedt by Frank Simon.

Raquel Rodriquez is a virtuoso of the first rank. The works on this program are among the most difficult of the turn-of-the-century cornet solo repertoire, a type of music noted for its difficulty. Rodriquez plays them with absolute perfection and musicality. The double and triple tonging passages are executed with delicacy and lightening speed. Lines that leap from high c above the staff to low G below the staff demonstrate her complete flexibility and command of the instrument. It’s not only Rodriquez’s flawless technique that is impressive but also her ability to shape those florid lines in a beautiful and musical manner is equally remarkable. These works strongly evoke the spirit of this period as many of the finest cornet solos can. Jan Corrothers does an admirable job as piano accompanist supporting the soloist with care and great skill.

Raquel Rodriquez is artist/clinician for the Conn-Selmer Company as well as for Denis Wick Mouthpieces. Rodriquez’s tone on the cornet is full and somewhat trumpet-like. This is slightly disconcerting given that my listening experience with much of this repertoire is of old recordings. Older smaller bore cornets and 19th and early 20th century cornet mouthpieces tend to get a slightly more delicate sound. This no doubt, is the natural difference between a modern cornet and period instrument. She is playing on a Getzen Eterna cornet and a Bach cornet 184ML on the cd. Additionally, Rodriquez uses a Denis Wick 4b mouthpiece.

This recording is a wonderful resource as it is the only recording that is dedicated to the music of these two important cornet soloists. This CD is as fine an example of this repertoire as one could imagine. Raquel Rodriquez has brought to life an important part of the brass tradition and done so with the utmost flair and musicality.