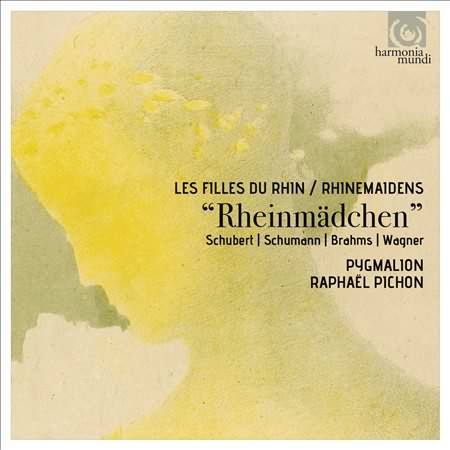 A recent recording on the Harmonia Mundi label features the vocal group Pygmalion, under the direction of Raphaël Pichon. In this recording we are treated to twenty one selections of music, mostly for female voices - our Rhinemaidens, of course - with several pieces featuring horns and harp. The pieces on this recoding are pulled from the oeuvres of Franz Schubert, Robert Schumann, Johannes Brahms, and Richard Wagner, along with one piece from Heinrich Isaac. Additionally, the works are organized in such a way as to illuminate similarities in text, literary themes, and musical devices amongst these titans of Romantic music.

Across the board, the singing on this album is gorgeous. The blend of the voices within Pygmalion is sublime and the appearance of mezzo-soprano soloist Bernarda Fink is an added treat. The horns feature in several tracks, both with voices and by themselves. The notable pieces for horns include a quartet by Brahms, "Ich schwing mein Horn ins Jammertal," op. 41/1, an arrangement for horn quartet of Siegfried's Funeral March from Götterdämmerung, and the famous "Long Call" for solo horn from Siegfried. Anneke Scott's rendition of the "Long Call" is particularly impressive given that it was played on a single B flat horn. To my ear, the horn playing truly shines when the horns are joined with the voices. The closing four tracks, Vier Gesänge, op. 17 of Johannes Brahms, feature both lush arpeggios from the harp and soaring calls and joyous and plaintive melodies played on natural horns. Hearing these amazing songs, one is reminded why so many composers have paired horns with voices.