The Breathtaking Collective: On the Breath of Angels

The Breathtaking Collective, dir. Bruce Dickey. On the Breath of Angels. Passacaille PAS 1091, €17.00

On the Breath of Angels is the second release from Bruce Dickey, Hana Blažiková, and the Breathtaking Collective dedicated to exploring the natural and much sought-after affinity between the cornett and the human voice. Anyone who has heard the first disc will know that Dickey and Blažiková’s combined vocality and musicianship achieves this to a remarkable degree, and this second provides further opportunity for intriguing and inventive programming that showcases this partnership. 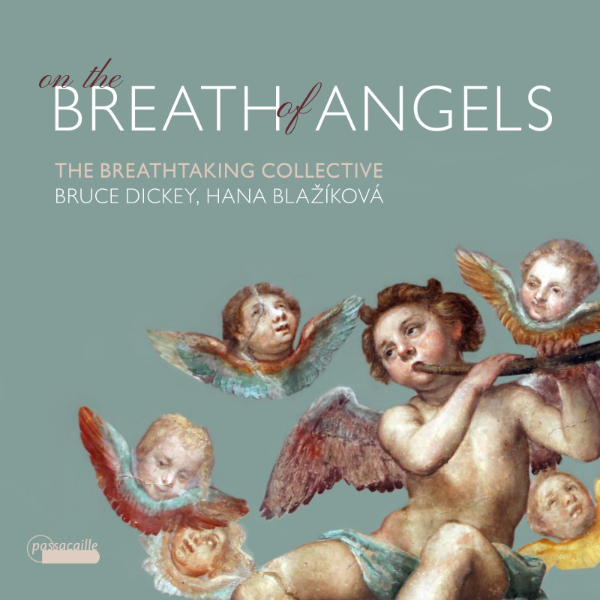 The concept behind the disc, eloquently discussed by Dickey in the liner notes, is to present repertoire united by the theme of angels, a response to sixteenth- and seventeenth-century depictions of the cornett in ensembles of angel musicians. More a point of departure than strictly a theme, some of the pieces have texts centred around angels, while some simply invoke the “angelic” nature of the pairing of cornett and voice. The programming adopts a flexible approach to the employment of the cornett, sometimes reflecting original instrumentation, sometimes adapting vocal or violin lines, and ranges widely over the cornett’s historical repertoire, from diminutions on sixteenth-century motets to virtuosic opera arias of the late seventeenth.

The opening set of pieces focuses on music from the enigmatic Carlo G Manuscript, providing ample opportunity for imaginative instrumentation of the surviving source materials, a particularly successful example of which is Sicut sponsus Matris, designated for quattro viole et canta due soprani and performed here on two violins, two violas da gamba, cornett, and voice. A similar approach is applied to the later historical repertoire in the programme, in which the flourishing in popularity of the cornett among Neapolitan opera composers of the later seventeenth century is exploited to great effect. Taking their exploration of Alessandro Scarlatti’s cornett writing begun on the first Breathtaking CD further, the ensemble offers here a suite from Il Comodo Antonio (1696) closing the disc with fireworks all round. But my favorite moment on this album is surely the transition from the lesser-known Giovanni Bononcini’s Tutte armate from Il Trionfo di Camilla (1696), with its original virtuosic cornetto obbligato and vocal gymnastics, both flawlessly executed, into Erik Satie’s Les Anges, performed with such delicacy by Blažiková and Jakob Lindberg on theorbo—the concept album is not dead.

Two newly commissioned pieces complement the historical repertoire here, continuing Dickey’s admirable dedication to new music for the cornett. The composers were each invited to set a text on the theme of angels and to take the interplay between cornett and voice evidenced by earlier works as their compositional starting point. Julian Wachner (b. 1969) has set a moving text by Rupert Brooke, The Vision of the Archangels from 1906, for voice, cornett, violin, viola da gamba, and organ with extreme sensitivity and care, and I challenge anyone to distinguish between the cornett and the voice at Dickey’s first entry. Ivan Moody (b. 1964) has contributed a wonderful piece for voice, cornett, and organ on a liturgical text from the Orthodox church, drawing influence from Eastern chant in his compositional style and making an interesting counterpoint with the Tsoupaki commission from the Collective’s previous disc.

Blažiková’s virtuosic adaptability unites the wide-ranging programming of this release, but this disc does more than showcase stunning cornetto playing and vocal poise. It is the group’s performance as a whole that sets this release apart for me, with vocality infusing the playing of each and every musician, from Skuplik’s opening phrase of Panis angelicus to the slow closing passacaglia of the Cavalli trio (track 6), in which the whole ensemble sighs towards the inevitable final cadence with incredible pathos and skill.

The recording of this CD only just avoided interruption from the first coronavirus lockdown in March 2020, and we can thank whichever angels we like for that. It is a great addition to the Passacaille catalogue and further indication, if it were needed, of Dickey’s remarkable creative drive, not to mention cornett playing, that can give us all something to aspire to.