His Majestys Sagbutts & Cornetts: In Chains of Gold and Hieronymus Praetorius 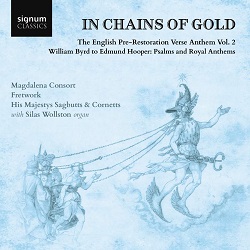 I have long thought that the best ensemble players are those who are able to intuitively emulate the properties of the instruments around them, no matter how unlike. The first few notes of In Chains of Gold, a sparkling compilation of anthems by Orlando Gibbons performed by Fretwork, the Magdalena Consort, and His Majestys Sagbutts & Cornetts under the artistic direction of William Hunt, transported me to that time and place where instruments and voices have arrived at a perfect fusion of affect and color while yet retaining each of their distinct qualities.

In Chains of Gold is a welcome addition to the current oeuvre of historically informed English consort music recordings, most of which have been performed solely on viols, voices, or a combination of the two. Indeed, the majority of the pieces on In Chains of Gold remain restrained by this ensemble choice, but William Hunt’s decision to include “organs, cornets, sagbot, and other excellent instruments of musicke” reflects a newer, more accurate assessment of Gibbons’s anthem instrumentation: a flexible, venue-dependent orchestration that included diverse instruments far beyond the confines of the viol consort.

Hunt’s careful research and informed choices for instrumentation, orchestration, and pitch make this album a true delight. Proving that historical performance is not just an intellectual exercise, the zippy, tangy timbre of the smaller-scale English viols and light, high tenor voices (“Contratenors,” as described in the liner notes) adds a simultaneously brilliant, visceral, and translucent quality to Gibbons’s works that is rarely heard in today’s performances of early modern English choir music. This is especially apparent in the track “Do not repine, fair sun,” where moments of sprightly energy and dance-like passages contrast with long, taffy-like phrase arcs and soaring motion from the highest to lowest voices. Fretwork is unafraid of dissonance and makes no apologies for the gritty false relations in Gibbons’s “In Nomine a 5 No. 2,” boldly asking the listener to reevaluate our twenty-first sensibilities of what “early music” sounds like.

HMSC joins the ensemble for three pieces. The first is “Great King of Gods,” an anthem celebrating the return of King James to Scotland in 1617 that Hunt describes in the liner notes as “chordally weighted” and “upbeat.” Reflecting, perhaps, this weighted character, the entrance of the brass shifts the affect almost immediately. The translucence of the viols gives way to a rich, dark color, and the vocalists themselves shift their timbre and phrasing to fit into this new ensemble. “O all true faithful hearts,” a thickly orchestrated celebration of James’s recovery “from a great dangerous sicknes,” similarly follows this model, with a galliard section that, if not exactly dance-like, certainly evokes the grandeur of a royal occasion. Finally, “Lord, grant grace” combines all three ensembles in a traditional polychoral style, concluding the album—as is appropriate—with the most opulent setting of Gibbons’s music.

While In Chains of Gold leaves very little wanting, I would have enjoyed a bit more boldness on the part of the brass ensemble, which, while reflecting a technical mastery and cohesive sound distinctive to HMSC, stops short of the intense, energy-driven phrasing and affect that I hear from the viols and voices. This could have been achieved with more connection between notes in the lowest voices, as well as a general commitment to longer phrase arcs with greater dynamic fluctuation and direction. Hints of this character do, however, emerge every so often—especially in the inner voices, as in the opening section of “O all true faithful hearts”—and I greatly enjoyed the occasional graceful ornament by a trombone or cornett that sometimes broke away, briefly and tantalizingly, from the texture.

As a whole, In Chains of Gold is a triumph, breaking ground in many aspects of historical performance. In its best moments, the album achieves that intangible quality for which seventeenth-century historically informed performance truly strives: a simultaneous brilliance, spice, and sonority that transcends the sum of its parts. 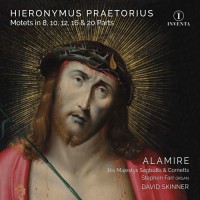 David Skinner’s ambitious recording of Hieronymus Praetorius’s polychoral motets, performed by Alamire, His Majestys Sagbutts & Cornetts, and organist Stephen Farr, opens with the resonant, buttery sound of voices perfectly melded with their brass instrument doubles. I listened to Hieronymus Praetorius after In Chains of Gold, and the stark contrast between the intimate intensity of the latter compared to the immense aural surround sound of the former provided an interesting exercise in comparing apples to oranges, with HMSC as the connecting thread between the two.

Sonic immersion is the dominant trait of Hieronymus Praetorius, and Skinner makes ample use of the massive forces that he is fortunate enough to employ. Different combinations of voices, trombones, cornetts, and organ create variety, with vocal ensembles used for smaller works and brass added to create richness and volume on the larger pieces. The organ at Roskilde Cathedral makes a particularly impressive impact, and is arguably the star of this show, with its original sixteenth-century pipework and grand array of stops displayed to their fullest, most powerful capacities.

Hieronymus Praetorius presents a glimpse into the music and style of an overlooked composer, something that is greatly needed today, when much of historically informed performance has begun to solidify, disturbingly, into its own “great composers” canon. However, I must take issue with the claim that the album presents a “near-complete stylistic snapshot,” as stated in the liner notes. While it is true, as Skinner mentions, that the Syntagma musicum of Michael Praetorius (no relation) offers an astounding array of orchestration choices for Italianate German polychoral music—implying, perhaps, that no choices are outright wrong—it is unlikely that a fully-orchestrated performance of this music during its own time would have eliminated reeds, strings, and plucked instruments, especially in Hamburg, where members of the city Stadtpfeifferen would have participated in larger-scale musical events. I also question a few of Skinner’s tempo choices. Without wishing to rehash the long history of opinions on early seventeenth-century tactus, slightly faster tempos on some of the pieces—for example, “Nunc dimittis a 8”—would have driven the music forward, giving it more life, direction, and verve.

HMSC are displayed more prominently here than In Chains of Gold, though the stylistic capabilities of these excellent musicians are not always fully unleashed. On the tutti works, the players achieve a near-perfect blend with the singers, especially in “Dixit Dominus a 12” and “Iubilate Deo a 12,” though I could have used more exaggeration of the music’s dynamic hills and valleys (and, in the singers, less equality between notes). I was pleased to hear the players dig a little deeper into the dissonances and consonances of the brass feature “Ecce quam bonum a 8,” especially the trombone choir, which sounded rich and harmonious in their answers to the higher voices. Even so, it wasn’t until the last piece on the album, Praetorius’s thrilling sixteen-part “Exultate iusti,” that I felt the brass were truly given free rein. It was here that I heard the cornetts finally take off, soaring and sparkling over the ensemble, and where the brass choir fully blooms in both volume and direction.

In Hieronymus Praetorius, Skinner creates a world in which the composer’s music is presented less as individual pieces with their own distinct character, but as a single sonic experience in which the listener is surrounded for the duration by impeccably performed, if somewhat unadventurous, sonority. Brass enthusiasts, though, will appreciate the inclusion of HMSC’s ten-voice cornett and sackbut ensemble. Such luxurious scoring is a rare treat for us players, and we can only hope that such generous orchestration remains a possibility for future performances of early seventeenth-century music.