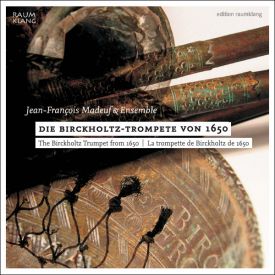 There is fascinating story behind this recording. Actually, there are three stories interwoven and they must be presented in this review to appreciate properly this wonderful recording.

The first story centers on an old trumpet found hanging on a nail in the wall of the village church of Belitz in northern Germany. Belitz is a short distance south of Rostock, where master historical trumpet-maker Michael Münkwitz has his studio. Briefly (the entire story can be read on Münkwitz’s web site), an old trumpet had been hanging on a nail in the village church for a mere 350 years. It turned out that it was not “just” an old trumpet, but was identified by Münkwitz as having been made by Wolfgang Birckholtz (?-1701). Further research revealed that Birckholtz had trained in Nuremburg under renowned master Hanns Hainlein and had set up his own shop in 1650. Not only was the maker known, but more research led Münkwitz to its early provenance: Jacob Hintze (1624-1676). Hintze was a Staff Trumpeter in the Thirty Years War and was given title to a tavern in nearby Neu-Heinde for his services. Some years later he met a violent death and a votive painting was commissioned by his widow to hang in the village church. Next to the painting was his trumpet.
The trumpet hung there for 350 years until it was shown to Münkwitz by the pastor. This is where the second remarkable story begins. Münkwitz, along with Prof. Richard Seraphinoff (Indiana University) studied and took measurements of the instrument. Münkwitz then began making replicas of it. All of the trumpets used on this recording are the result. They are pitched in D flat (A=440hz) with bits for C and C flat, are crafted using only historic methods and have no vent holes.
The third and most wonderful story is that all of this has resulted in this recording itself. Jean-Francois Madeuf has established his career on performing exclusively on ventless trumpets, with remarkable results. The liner notes indicate that Birckholtz trumpet was likely used as a field trumpet and not for playing art music. Consequently the recording begins with several signals by Magnus Thomsen (ca. 1598). The Birckholtz/Münkwitz replicas enable the players to produce a sound which has particularly robust fullness. The playing is perfectly in tune and carried out with historic articulations.
So much for field trumpet qualities, but is it possible to play art music on these instruments? Madeuf’s playing answers that with a resounding “Yes!” On Johann Pezel’s 1675 Sonata No. 75 for trumpet, dulcian, and organ, Madeuf displays a lightness of sound while negotiating the tricky acrobatic passages with all the grace of a ballet dancer. His technical work near the end of the piece is absolutely virtuosic. It goes without saying that his intonation of the 11th and 13th partials is excellent, nor does he have any trouble in the upper register. In Pezel’s Sonatas Nos. 69 and 70 Madeuf is joined by Christoph Draeger. Together they beautifully shape their phrases and achieve a joyful triumphant feeling (in No. 69), and perform elegant dance-like phrases (in No. 70).
The ensemble is joined by timpanist Philip Tarr in works by Daniel Speer and Michael Preatorius with exciting results. Tarr demonstrates his virtuosity by employing historic techniques described by Daniel Speer.
Christina Hess and Michael Büttler display very refined sackbut work on the Concerto a2 by Adam Jarzebski (1590-1648/49) and throughout the many-layered Sonata a5 “Battallia” in C major by Paul Hainlein (1626-1686).
Hainlein, a trumpet maker in Nuremburg, was the nephew of the Hainlein under whom Birkholtz trained. This many-sectioned work begins with a stately phrase with sackbuts and dulcian, then moves on to a more heroic section with trumpets and timpani, on to an imitative section with violins, sackbuts and organ. It then adds the trumpeters, with all paying respects to the many gestures of hemiola, before concluding with the full group in a spectacularly festive way.
Organist Marc Meisel plays continuo throughout. Additionally he plays majestically on a Praeludium (BuxWV163) by Dietrich Buxtehude and with serenity on the Choralefantasie on “Vater unser im Himmelreich” by Georg Böhm (1661-1733).
Violinists Anne von Hoff and Catherine Aglibut are heard throughout and are featured on Capriccio #20 by Johann Vierdanck (ca. 1605-1646). While always sensitive to smooth phrasing, they demonstrate great technical flare when appropriate.
Krzysztof Lewandowski displays his talents throughout the recording. He is a solid foundation, can be bombastic when necessary, but often shows nimble facility and graceful phrasing.
There is great variety and color in the repertoire chosen for this recording. It is a perfect mix of well-known composers (Pezel, Praetorius, Buxtehude) and some lesser-known but still very worthy (Jacob Arnold, Paul Hainlein, and others). The liner notes by Madeuf, Tarr and Meisel are quite thorough and stimulate one to look further for similar repertoire. Of particular interest is the detailed information offered by Tarr on historic practices for timpanists and the special role they filled.
Three stories have combined to produce this fine recording which is not only an important historic event, but just as important, is a complete pleasure to hear over and over. We have Michael Münkwitz to thank for breathing new life into the Birckholtz trumpet of 1650, and Jean Francois-Madeuf to thank for once again, demonstrating the noble art of historic trumpet playing and inspiring us to follow in this tradition.