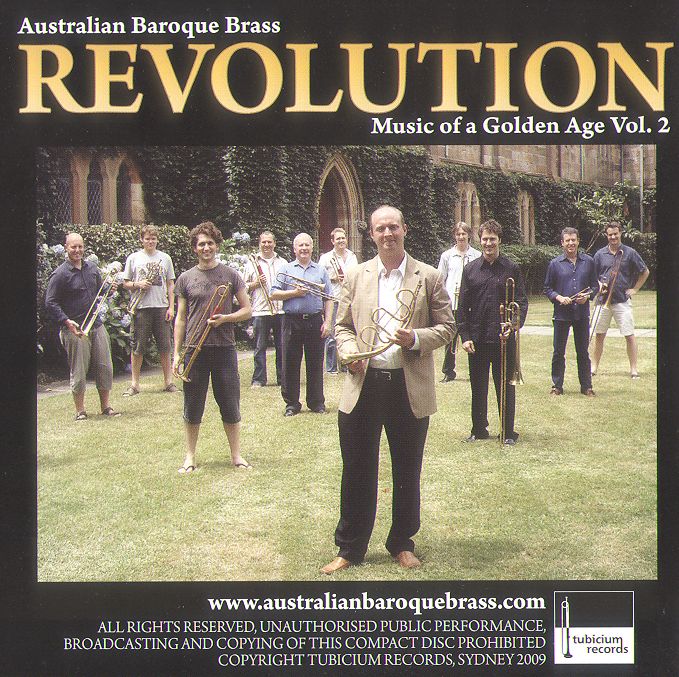 This latest Australian Baroque Brass CD explores repertoire from the end of the 18th and beginning of the 19th centuries. It was a time of political and social upheaval as well as musical change. Brass players in particular, were searching for ways to escape the limitations of the harmonic series and this recording illustrates two groups of repertoire; one which adheres to the limits of natural brass and that which achieves chromatic possibilities through the use of hand stopping and mechanical inventions. The first group, conforming to the harmonic series, include music by Neukomm (3 Fanfares), Mozart (Divertimenti No. 5 K. 187), Salieri (8 Aufzuge), Rossini (Le Rendez-vous de Chasse), Diabelli (4 Fanfares), and Altenburg (Quartricinium). The pieces by Cherubini (Pas Redouble no. 1,3,5,6 Premiere Marche), Weber (Marcia Vivace), Beethoven ( Drei Equali. Sonate Op. 17), and Schubert (Auf dem Stom) demonstrate chromatic possibilities.

Very well played, this CD offers a greater range of interest than many brass programs. It is wonderful to hear John Foster so deftly play the demilune trumpet on the Cherubini Pas Redouble pieces with its typical sixteenth note triplet figures. Darryl Poulsen deserves special note for his beautiful performance of the Beethoven sonata for horn and fortepiano and the glorious Vienna horn obbligato part on Schubert’s song Auf dem Stom. The Salieri trumpet fanfares sound like they come from the pen of a master composer with a more developed and varied quality than is typical of this genre. Ed Tarr wrote the program notes to this recording and they are thoughtful and comprehensive, as we have come to expect of one of our leading brass scholars. He relates that Rossini’s hunting horn piece was written for a hunting party given by Baron Rothschild. When the hornists protested that the written Bb did not exist on the hunting horn, Rossini, whose father was a hornist and he himself played horn, took the ensemble behind a large hedge and played the passage with the written Bb himself! The Beethoven Equali for 4 trombones, the funeral pieces that were performed at the great composer’s own interment, were very expressively performed by the trombonists of the Australian Baroque Brass.

The Australian Baroque Brass play horns by Richard Seraphinoff based on an original by Leopold Uhlmann (Vienna, ca. 1830) and exclusively play Andrew Naumann trumpets. Given the relatively modest technical demands of this repertoire, it would have been nice to hear it performed on more authentic natural trumpets rather than the vented Naumann instruments. However, that’s a small quibble. The playing is wonderful and this CD offers many seldom recorded brass pieces from a fascinating period of transition.