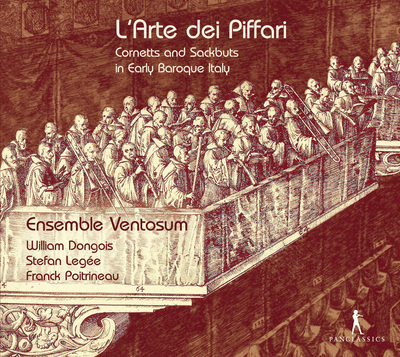 This recording is a superb example of the “Golden Age of cornets and trombones in in Italy from 1580-1700. Ensemble Ventosum plays with great beauty, perfect intonation and blend. There are a number of noteworthy features of this recording. Perhaps what first stands out is the warmth of phrasing which pervades the entire recording. This is uniformly displayed by each member and thus, the ensemble literally breathes and sings as one voice. Rising above this beauty are ample displays of virtuosic passagi, all tossed off with seemingly no effort and at the same time, wholly tasteful and balanced in context to the music. Another feature of this recording worth noting is that several of the pieces are for the sackbuts alone. They play with a noble richness of sound. There is great drama in their interpretation of Palestrina’s Ave Maria with pasaggi by Bassano. Another particularly moving piece is the distinctively chromatic Calami sonum ferentes of Cirpriano de Rore in which they portray absolutely its gravitas.

Dongois and Petit-Laurent play beautifully and virtuosically throughout. Their cornettino work on the final tracks by Perti and Neri is remarkable.

Dongois composed the amazing passagi for Giovanni Gabrieli’s Domine exaudi, but what I really want to raise up is his work on Andrea Gabrieli’s Maria stabat ad monumentum. We all are aware that the cornettists Giralomo dalla Casa and Giovanni Bassano were celebrated in this golden age of music not only for their performances, but also for the passage which they composed. Indeed, we have today countless examples of their work. Enter now, William Dongois to their ranks. He has composed full divisions on this singularly beautiful work by Andrea Gabrieli which are at once virtuosic, glorious, and yet capture the moments of tenderness which are present. My words cannot convey the beauty which flows from his playing. I hope that this represents a pattern that we can anticipate on further recordings and that his editions will be available for purchase. One final note about this track. The listener will note a change in timbre. Dongois has revealed that he is playing a three-piece straight cornett (at 495) that has a mute part—his invention—which produces a mute cornett sound.

Ensemble Ventosum was founded by William Dongois, Stefan Legeé, and Franck Poitrineau. It is led musically in a democratic way with each artist’s opinion highly respected by the others, something which can easily be heard and appreciated on the recording.

Certainly there are already numerous recordings of cornetts and sackbuts playing repertoire from this period. L’Arte dei Piffari by Ensemble Ventosum stands alone in its offering. I have not heard its equal in richness, blend, virtuosity, and overall beauty.