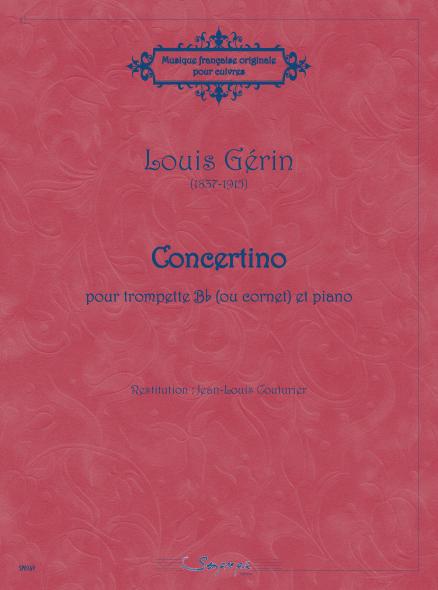 Jean-Louis Couturier has once again found a wonderful little-known gem of the 19th century cornet repertoire. This four-movement piece (Allegro, Même movement, Andante, and Polonaise) by Louis Gérin captures all the charm of the genre. The work has a range ab to f’’ and is filled with a multitude of fully chromatic, lyrical melodies that modulate through a series of key changes. The Concertino is of moderate difficulty but thoroughly enjoyable both to play and hear.

Louis Gérin has escaped mention in the standard reference sources including Rick Schwartz’s comprehensive Cornet Compendium and Appendix. Fortunately, Couturier has provided some biographical information. Gérin was born on April 4, 1837 in Toulouse and taught cornet at the Lyon Conservatoire from October 1874 to October 1905. The source of this Concertino is in the Bibliothéque Nationale de France (Call number Vm9- 1222) and was first published in 1900 by O. Bornemann in Paris. The composition is dedicated to Monsieur Aimé Gros, Director of the Lyon Conservatoire and Public Education Officer. Gérin published several brass methods including the Grande method de cornet á pistons (1881), the Méthode de trombone á pistons (1893), and the Nouvelle method de saxhorn (1893). We owe Jean-Louis Couturier a debt of thanks for not only bringing to light this wonderful cornet solo but for not allowing the name of Louis Gérin to fade into complete obscurity.