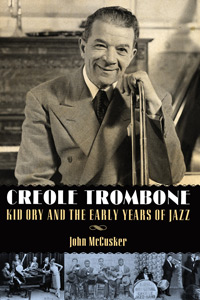 This is an excellent book and leaving aside a short pamphlet put out by the UK jazz magazine Crescendo, it is the only study to be devoted to one of the iconic trombonists of jazz. I use the word iconic in the absence of any other term that properly describes him. He was certainly famous, but was he a great player? Therein lies the rub: why was Ory such a celebrated player when, by the evidence of his recordings, he was not always fully in charge of the instrument he played? Lawrence Brown, another iconic trombonist, refined his technique by playing cello music as a teenager because he “wanted to get away from all that tailgate stuff”—I wonder to whose recordings he had been listening. Brown is universally regarded as a great player; Ory occupies a different place.

Of course, this judgement can legitimately be regarded as contentious. If Ory was not a special player, why did King Oliver go to such lengths to attract him to Chicago? Why did Louis Armstrong want him in the Hot Fives and Jelly Roll Morton in his Red Hot Peppers? Several writers have viewed his musicianship with equivocation. I suspect the answer to all this, as McCusker rightly infers, is that Ory has often been assessed against cultural values to which he did not subscribe. He belonged to a time and a place. His playing, as much as that of anyone, maintained a spiritual purity and loyalty to a tradition that provided the first idiomatic language of jazz. As I have pointed out elsewhere (HBSJ 2010), trombone players in New Orleans used the slide trombone in a particular way: a style that was rejected in later phases of jazz. Ory was an exemplar of that style; his career covered half a century and the style never changed fundamentally. This despite the fact that, as Kurt Dietrich has pointed out, Ory improved in the company of players such as Armstrong—compare for example the 1922 and 1927 recordings of “Ory’s Creole Trombone.”

John McCusker is a New Orleans journalist with a deep knowledge of the city’s formidable jazz years. He has used the oral history collections of the Hogan Jazz Archive at Tulane University and a number of other local sources, as well as the recordings, to create this valuable biography. He also had access to another source that I have known about for years, but never managed to get my hands on. The oral history interview with Ory contains a reference to an autobiography. It is not described in any detail because the transcript shows that the interview was interrupted persistently by Ory’s daughter, a small child who was having one of those days that parents wish small children did not have. The daughter, now a woman, retained the unpublished autobiography and gave McCusker access to it. This material gives the book an extra edge of freshness and originality.

The book is excellent and I recommend it without reservation: McCusker knows how to write, so it is enjoyable as well as informative. I have one gripe, albeit an unfair one. The period between Ory’s return to California in 1933 and his death in Honolulu in 1973 (that is, the last forty years of his life) is the subject of just a five-page epilogue. By the 1940s Ory’s fortunes had taken a downward trajectory. After a grim period working as a railroad clerk and as a “poultry farmer” (some chickens were penned in his brother’s back yard), things got acutely brighter. He discovered that “Muskrat Ramble” generated royalties, and the ensuing flow of funds supported him for the remainder of his life. Then he was famously encountered by Orson Welles, who heard him with some old New Orleans sidekicks playing for peanuts in a Los Angeles nightclub. Welles decided he had discovered authentic jazz, gave the band a regular spot on his radio show and the first real traditional jazz revival was given exposure. I have always found this to be an especially interesting episode in Ory’s career because it is an example, probably the earliest, of the idea that jazz had a performance history worthy of reconstruction. I would have liked to have found out more about this period. In fairness to McCusker, he is careful to describe his book as covering just the “early years of jazz,” but I wish he had gone further—no one is better-placed to do so.