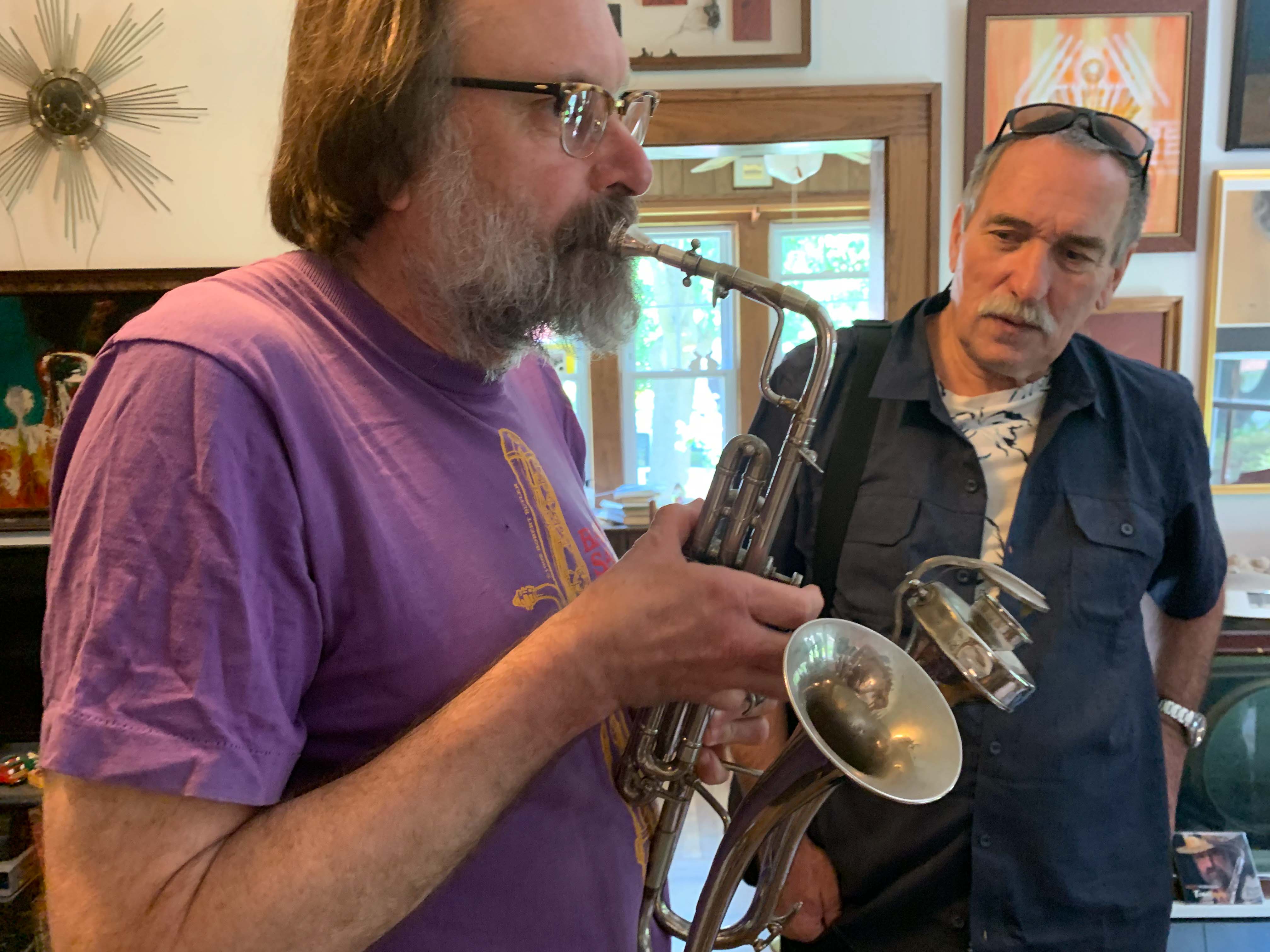 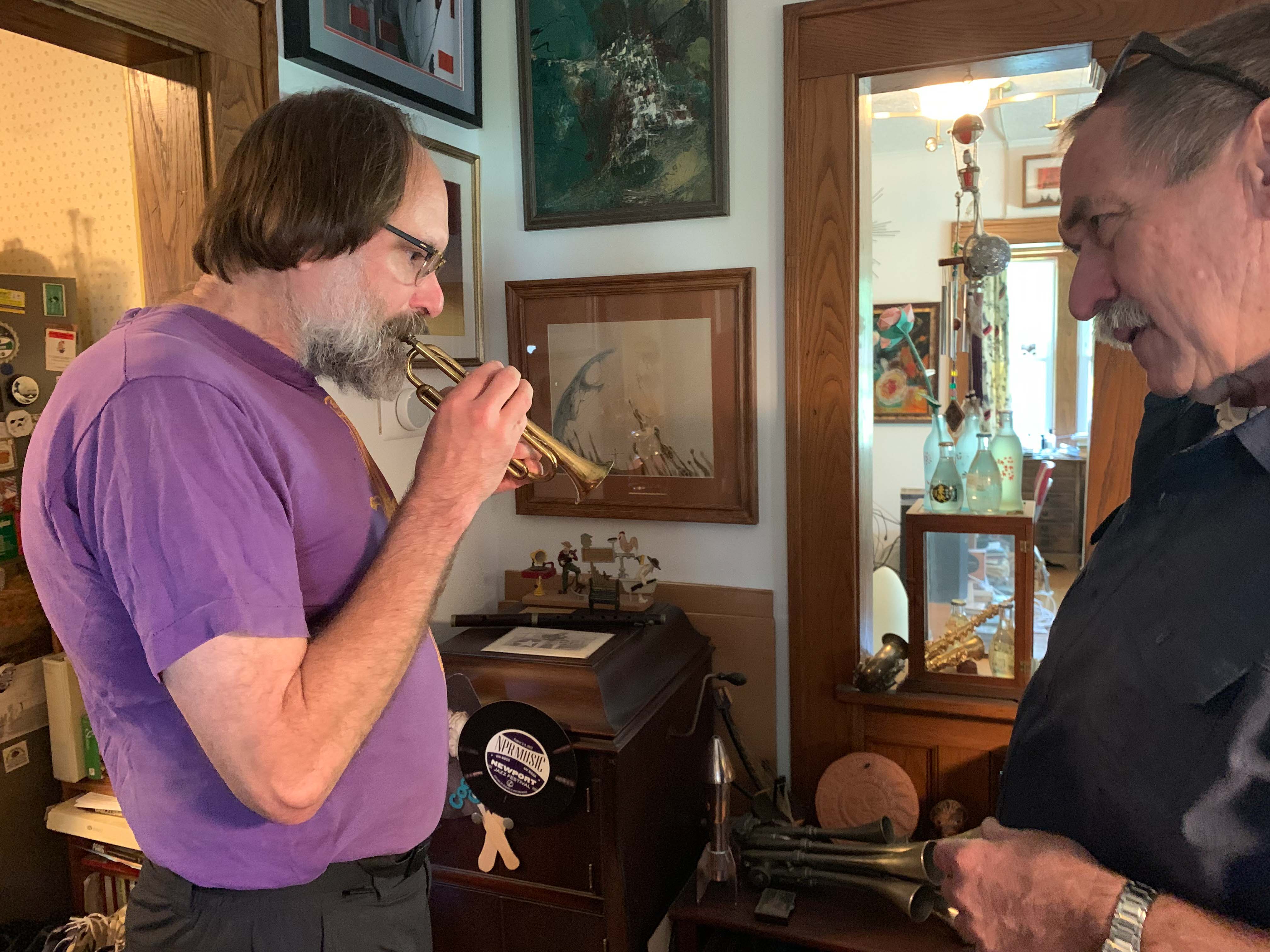 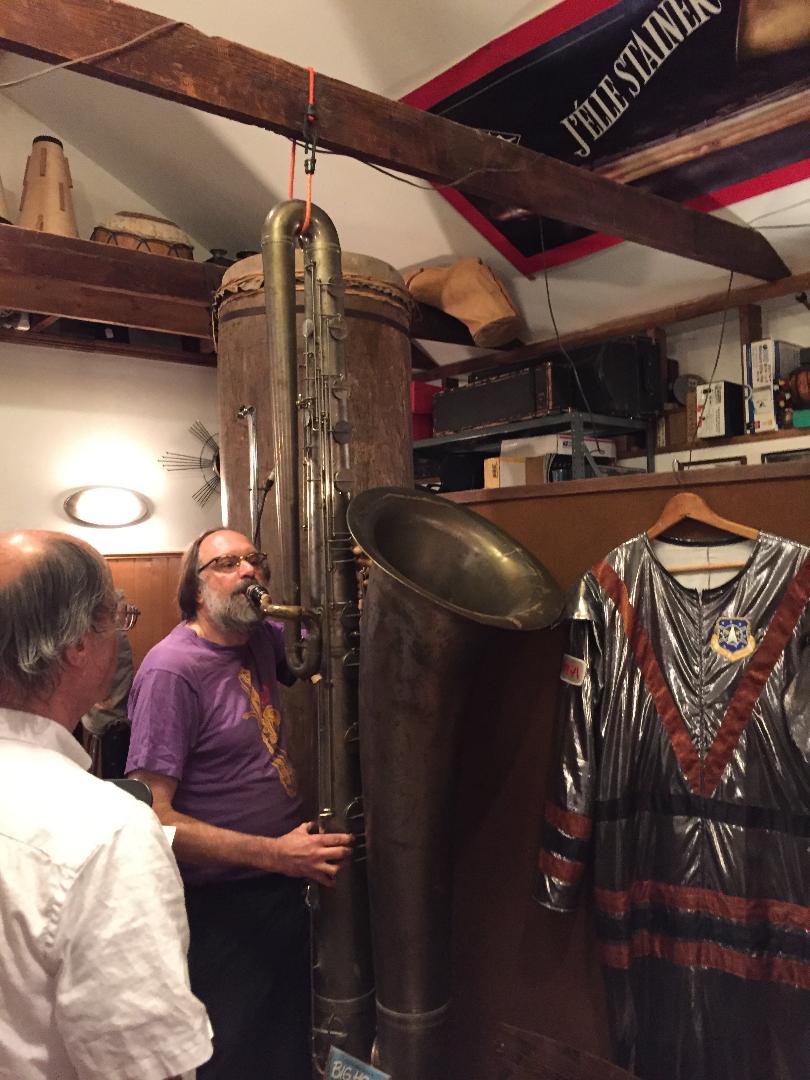 A world-famous jazz musician, Robinson is known to surprise his audiences by not only playing his 1924 silver Conn tenor saxophone but perhaps his 1899 Boston tuba, or a 19th century French ophicleide, 19th century Eb Conn alto cornet, or a 1920s jazzophone or any number of the dozens and dozens of instruments drawn from his amazing collection of instruments. At this visit Robinson regaled his visitors with virtuosic renditions of jazz standards on his Stowasser contrabass sax,  Bb subcontrabass sarrusophone, (one of three known to exist), 1920s slide cornet or rare jazzophone with built in mute. He seems to have absorbed the dozens of fingering systems and slide positions with absolute ease. He proudly demonstrated the bass marimba that Sun Ra played and recorded on as well as the Rudall Carte bass flute previously owned by the legendary jazz musician Frank Wess. Classification of some of the more obscure instruments were in question. Was it an alto cornet or cornet shaped valve trombone!? A giant nine-foot ceremonial Philippine drum was acquired when a woman needed to leave her Brooklyn brownstone within weeks and desperately wanted to find a home for the enormous drum. Enter Scott Robinson who gladly transported it to his New Jersey laboratory.

There were many instruments of special note. An Issac Fiske rotary cornet with rotors actuated by a piston-like mechanism represents a very rare valve system that resembles a piston valve instrument but in reality is a rotary valve cornet. Robinson’s collection includes a family of Hungarian Tarogato instruments soprano, alto, bass and a rare contrabass that was made specifically for him.  When he played his Catalan tenora double reed shawm the sound was deafening.  The collection also contained both a Bb and C Rothophone which is a 19th century metal double reed instrument similar to the sarrusophone built in saxophone form but with a much narrower bore design. Paul Cohen who himself owns perhaps the largest saxophone collection in the country said that he never saw or even heard of a Rothophone pitched in C and there it was in Scott’s collection!  Another rarity is the Moog 201 theremin which was Robert Moog’s first instrument, one of 20 he made while in college. It is somewhat ironic that Scott Robinson’s latest venture is the release of his new CD Tenormore (Arbors Records) on which he only plays his tenor sax. However, Robinson has not abandoned his interest in playing a wide array of instruments. He is currently working on a 50 piece improvised symphony which he is creating one note at a time playing all the instruments himself!