10/20 - One of the great brass players and teachers, Harvey Phillips, died today. He retired as distinguished professor emeritus of the Department of Music, Indiana University, Bloomington after a long career as player, teacher, publisher and advocate. Starting with the Ringling Bros. and Barnum & Bailey Circus Band, he was a member of many bands and orchestras, including the New York City Ballet, New York City Opera, Band of America, Goldman Band, U.S. Army Field Band, Symphony of the Air under Leopold Stokowski and Igor Stravinsky, the RCA Victor Orchestra, NBC Opera Orchestra, and the New York Brass Quintet. Often referred to as the "Paganini of the Tuba", he was also a world renowned solo artist, and his performances include two dozen Carnegie Hall (NYC) solo recitals, the first solo tuba recital at the Library of Congress, over two hundred clinic/recitals at colleges and universities throughout the world, with international tours of Japan, Australia, Scandinavia and Europe. He was  founder and president of the Harvey Phillips Foundation, Inc. which administers Octubafest, Tubachristmas, Tubasantas, Tubacompany, Tubajazz, etc.

10/19 - The American Brass Quintet, comprised of trumpeters Ted Weiss and Robert Henrich, trombonists Arnold Fromme and Gilbert Cohen and hornist Arthur Goldstein, gave their debut recital on December 11, 1960 at New York's 92nd Street Y. Fifty years later, this past October 15, 2010, the current incarnation of the ABQ presented an anniversary concert at New York's Alice Tully Hall. The current line-up  includes trumpeters Ray Mase and Kevin Cobb, trombonists Michael Powell and John Rojak and hornist David Wakefield presented a concert of 3 contemporary brass compositions by Joan Tower, Trevor Gureckis (NY Premiere), and David Sampson (New York Premiere) as well as a number of early Baroque pieces. They ended the performance with a glorious reading of Gabrieli's Sonata XX, assisted by 15 outstanding Juilliard brass students. While not the first ensemble of its kind, other groups organized in the 1950s including the New York Brass Quintet, the ABQ was important in helping to popularize much Renaissance and Baroque repertoire that would become the staple of cornett and sackbut ensembles and other early music groups.

9/24 - Wilhelm Bruns announces the release of his new recording of Haydn's Concertos 1 and 2 and Symphony No. 31 on natural horn under the Profil label. The recordings were made during the 2009 Haydn-Year celebrations. The HBS will be reviewing the CD in the near future.

9/23 - In January 2010 the natural horn player Anneke Scott was awarded a prestigious Finzi Travel Scholarship to undertake performance-­based research into the composer and horn player Jacques‐François Gallay. The scholarship will fund a month in Paris where Anneke will have the opportunity to focus specifically on Gallay’s "Douze Grands Caprices" – a set of unaccompanied pieces for horn written in the 1840s, in a very similar style
to the famous Paganini Caprices for solo violin – in preparation for the recording of the Caprices that Anneke will be making in November 2010. This will be the first time the set of highly virtuosic compositions has been recorded in its entirety on natural horn.

8/26 - The Museum für Musikinstrumente der Universität Leipzig will be featuring an exhibit entitled "The German Trombone" from Sep. 4, 2010 through July 29, 2011. More details are available on-line at www.grassimuseum.de.

8/11 - The Early Brass Festival in Northfield was a great success! Thanks to all who participated in making it an enjoyable and informative time for all. Plans are already underway for the 2011 EBF in Bloomington, Indiana. We are anticipating one or two significant keynote speakers/masterclasses and an interesting variety of scholarly papers and playing sessions. The weekend will also dovetail into the Barclay/Seraphinoff trumpet building class to save on travel expenses; those wishing to build an instrument are encouraged to register early as space is limited. Hope to see you there!

8/11 - John Gilligan is seeking any information on V .Caussinus (1806-1900) or his music. He was a member of the Conservatoire of Paris and wrote several instructive works, among them a method for the cornet. Please email him if you can be of help!

7/24 - Henry Howey writes that he has posted 21 marches and four concert works by Amilcare Ponchielli for band in PDF, MP3, and MusicXML. Also, a funeral march for Manzoni and the Sulla Tomba di Garibaldi are included. He has also provided modern band transcriptions in parts. They have been prepared in celebration of the Sesquicentennial of the Italian Risorgimento (1861-2011). Visit http://www.shsu.edu/~org_neh/ for further information.

7/23 - ACor, the French association for horn, has announced the publication of a number of historic works for horn; click here to view. Their annual congress will be held November 19-21 in Orleans; for more information click here.

4/28 - Oxford University Press intends to publish a second, revised and expanded edition of The New Grove Dictionary of Musical Instruments, originally issued in 1984. Reflecting advances in scholarship during the past quarter-century, the second edition will encompass a greater range of subjects in more detail, thus serving a larger community of readers worldwide.

Your assistance is invited in enhancing the usefulness, accuracy, and diversity of articles in the forthcoming GMDI, which will appear both in print and incorporated into Grove Music Online.  Notice of errors and omissions in the previous edition and its derivatives, bibliographic updates, and suggestions for improvement especially in coverage of non-European and electronic instruments, can be e-mailed to the Editor-in-Chief at the address below.  All recommendations will be considered in planning new articles and revisions.

As a cooperative enterprise of encyclopedic scope, the GDMI second edition aims to represent the current state of instrument studies as comprehensively as possible while also preparing a platform for future expansion.  Timely advice from musicians and music historians, instrument makers and collectors, ethnomusicologists, organologists, teachers and students, and specialists in related fields is earnestly solicited.

Journal of Band Research on CD-ROM

4/15 - The American Bandmasters Association is offering a CD-ROM of the complete back issues of the Journal of Band Research from 1964-2005. There are 81 issues in full text format with an index of articles included. The price is $30 including shipping for the USA and Canada and $35 for other countries.

4/14 - The HBS is co-sponsoring a conference on musical acoustics which is being presented by the Institute of Musical Acoustics (Wiener Klangstill) in Vienna on Sept 19-21, 2010. A number of other organizations are involved including the American Musical Instrument Society.

3/25 - The Fritz-Thelen-Prize 2010 of the International Society for the Promotion and Research of Wind Music (IGEB) has been awarded to Patrick Hennessey for his work on Henry Berger, the "Father" of Hawaiian Music. The prize commemorates one of the cofounders of IGEB, Fritz-Thelen, and is presented for the writing of an outstanding dissertation in the field of wind music research. Hennessey will speak at the 19th IGEB-conference in Oberschützen, Austria this year.

2/10 - The 26th Annual HBS Early Brass Festival will be held this coming August 5 -8, 2010 in Northfield, MN, in collaboration with the 2nd Vintage Band Festival. The Vintage Band Festival will host various ensembles. Paul Niemisto has lined up over 20 period instrument groups that will perform. In addition to those activities, the EBF will present the usual array of lectures, performances, and informal playing sessions for all early brass instrument; natural trumpet, natural horn, cornett, sackbut, serpent, and 19th century brass. A special pre-EBF excursion will be organized to visit the National Music Museum in Vermillion, SD. Many participants will be staying at the Archer House in Northfield, where special festival prices have been arranged. Dormatory space at Carleton College has also been reserved ($30/night double; $45/night single).

An updated conference registration form has been posted for the registration fees and the dorm costs. If you've already mailed in the older form, no problem. If you wish to reserve a dorm, please use this new form.

The schedule for the EBF has been set and is available here. The VBF schedule and abstracts are also attached.

2/17 - Rick Seraphinoff will be directing his annual Natural Horn Workshop this coming June 14-19, 2010 at the Jacobs School Of Music, Indiana University, Bloomington, IN. This is a workshop for professionals, students, steachers, and advanced amateurs interested in the natural horn. The program includes daily master classes, ensemble sessions, and lectures. For those who do not own an instrument, a limited number of horns will be available. The registration deadline is May 14, 2010. For further information go to www.music.indiana.edu/summer/natural-horn or email

2/17 - On 14 July 2009, BRaSS (Brass Research and Scholarship in Scotland) hosted a Trumpet Forum at the Royal Scottish Academy of Music and Drama in Glasgow with lectures and concerts exploring different aspects of the trumpet.

BRaSS is a group of researchers and performers gathered around John Wallace, Principal of the Academy. Its idea is to bring together the various strands of brass scholarship and performing activities to stimulate interaction between performance and historical research at the Academy. Organized by Verena Jakobsen Barth, the Trumpet Forum focused on the many facets of the trumpet. It brought together researchers and performers in a program of paper sessions and performances that gave a myriad of insights, including historical aspects, organological considerations, contemporary and historical performance practices.

Following a welcome by John Wallace, the keynote speaker Trevor Herbert, presented his talk “The Trumpet: The Unanswered Questions”, in which he gave an overview of the state of research into the trumpet as well as an outlook into the future. Invited guest Reine Dahlqvist from Gothenburg talked about the Regent’s Bugle and other English slide trumpets, and in a later presentation, about the trumpet as a solo instrument in Vienna from 1660 to 1830. Three members of BRaSS gave papers: Verena Jakobsen Barth, talked about soloist profiles, Ph.D. student Rui Pedro De Oliveira Alves, about the trombone in Portugal and the Charamela Real, and Sandy McGrattan on the 'Bach' trumpet in 19th-century Britain. Professor Arnold Myers, who came over from Edinburgh, gave an insight into considerations about the identity and convergence of the trumpet and the cornet, and PhD student Raymond Burkhart from Los Angeles gave an overview of cornet and trumpet quartets in the United States from ca. 1885 to ca. 1935. Mike Diprose demonstrated the natural trumpet’s practical assimilation into current Historically Informed Performance (HIP) and John Wallace and Sandy McGrattan gave an insight into their forthcoming book about the History of the Trumpet (“From Jericho to Jazz”). Special guest John Webb finished the sessions by talking about signaling brass, demonstrating with items from his collection.

During lunch and coffee brakes the participants could enjoy Tom Poulson playing “Four Maries”, a newly composed solo piece by Michael Bennett.
The highly successful day ended with a reception and conference dinner, to the sound of 19th-century brass chamber music performed on period instruments by Academy brass students, joined by Bryan Allan (head of brass) and John Wallace.

2/10 - The Michaelstein Monastery Foundation in Blankenburg/Harz, Germany, hosted the 30th Music Instrument Building Symposium from 23–25 October 2009. This year’s theme was “The Cornett – History, Instruments and Construction.” Academics, musicians, and instrument makers from Germany, Austria, Switzerland, France, Italy, the UK, and the USA presented papers on numerous aspects of the cornett as well as on the second focus of the symposium, which was not mentioned in its title: the serpent.

Howard Weiner has completed his Report on the 30th Music Instrument Building Symposium in Blankenburg/Harz, which includes a synopsis of the activities, performance, and papers given. 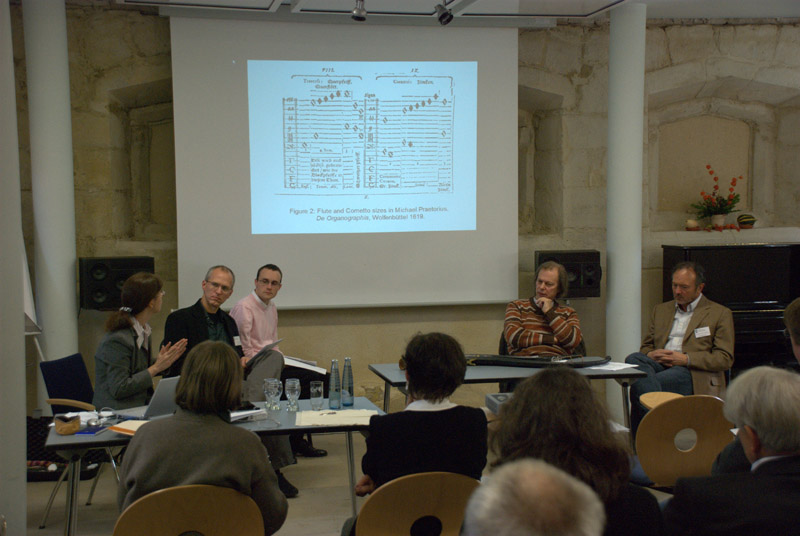 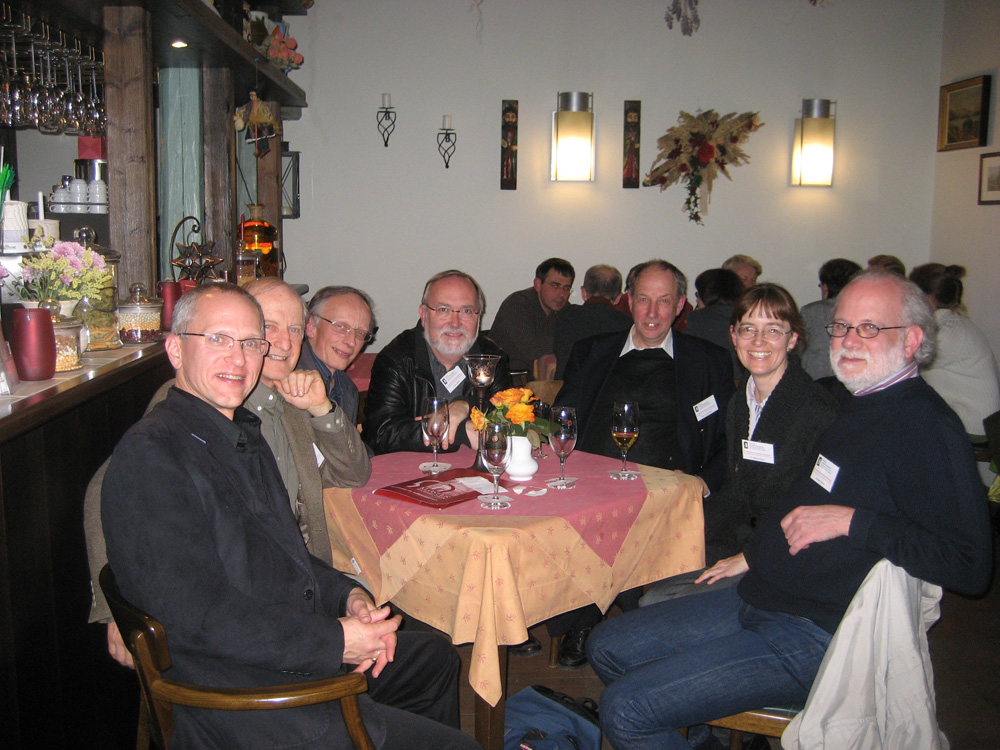 1/21 - The new year has seen the publication of Sackbut Solutions: A Practical Guide to Playing the Sackbut. This tutor was designed specifically for the sackbut and written by top European player Adam Woolf. The book, which boasts over 200 pages of advice, exercises, studies and solo and ensemble repertoire, is the fruit of many years of teaching and playing the sackbut at the highest level. It also refers throughout to historical sources. With something for players of any level and the aim to inspire and encourage players everywhere, Sackbut Solutions caters for those coming from the modern trombone, as well as those starting out on the sackbut afresh, addressing stylistic and technical issues including: concept of sound, articulation, ornamentation, tuning and pitch. Sackbut Solutions is available now by following this link: www.adamwoolf.com.