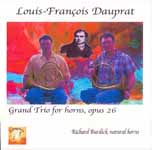 Richard Burdick, a well-respected, California-based horn player and composer has recently released 3 new self-produced CDs dedicated to the music of Louis-François Dauprat (1781-1868). He has blended period-instrument practice and 21st-century technology with the skilled use of overdubbing, which allows Burdick to play all the parts himself. This is certainly an efficient way of presenting this music, a repertoire that is certainly of great importance to the development of the horn and represents a passageway to valve horn writing. Dauprat's writing, particularly in the Trios and Sextets is extremely chromatic and represents a high point in hand-stopping technique. Burdick's performance is admirable indeed. While not flawless, he navigates the intricacies of Dauprat's music with great courage. Of course, no hornist contemporary with Dauprat would have been expected to play all the parts, since specializing on playing the low or high register was typical. For this feat alone, Burdick deserves praise. His phrasing of the musical line is lyrical and, of course, his "ensemble sense" is wonderful since his ensemble is "himself!"

The music itself presents somewhat of a mystery. What was this written for? Who would have played it and for whom? Perhaps the Dauprat repertoire is mainly pedagogical. He was, after all, an enormously famous and important horn teacher in Paris. The duets certainly could make a claim for this. The Trios, Sextets and his other works could also be regarded as mainly pedagogical. They are mainly written for horns alone. However, there is something a bit more elevated about these compositions. They certainly aspire to being artful works. They are also long. The core of pedagogical writing, the etude, is usually not so and we tend to think of teaching tools as being brief. The duos are four-movement works, and the three presented here, numbers 3, 5, and 6, clock in at just under one hour. Duo number 6 alone is about 22 minutes long. That is a lot of duo horn music and one does wonder what audience would find this thrilling. I would speculate that even Dauprat's Conservatoire horn class would find it challenging. Then again, perhaps this horn repertoire was intended for less formal situations than concerts and might have been played in out-of-door settings as background music.

The Trios and Sextet have an even more elevated compositional quality than the Duos, but, although there are many charming musical moments, in the end the musical quality does not hold up. When one considers that Beethoven, Haydn, and Mozart were alive during this period, it is easy to become restless with Dauprat's compositional prowess. And again, these pieces are so long. The six movements of the Sextet tally up to almost 40 minutes. Even with the ability for harmonic modulations though the use of different pitched horns, the music quickly becomes tedious. However, we must leave the greatness of Dauprat's music up to history to determine. For now, it represents a significant aspect of 19th-century horn writing and the end of a long tradition of hand-stopping and how a great proponent of that tradition addressed the increasingly complex and chromatic musical language of his time. It is unfortunate that there are no notes in these CDs. We are referred to Burdick's web sites for additional information, but scant information was found there. More details on the music, performance practice and instruments would have been welcome. More importantly however, Richard Burdick presents a forum in these CDs for a large part of this repertoire. Certainly horn players will be greatly benefited by hearing it played on natural horn and music lovers in general will gain a deeper understanding of chamber music of this time.