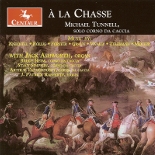 For this CD, Michael Tunnell has gathered seven concertos for the corno da caccia (Knechtel, Röllig, Telemann, Graun, Vivaldi, and two by Förster) many of which are difficult if not impossible to find on record elsewhere. The quality of the playing is excellent throughout; Tunnell’s supporting cast of extras (Bruce Heim, Stacy Simpson, Arthur Vanderhoeft, and J. Patrick Rafferty) also play well, including the unique Molter “Symphonia” for four unaccompanied horns.

This CD will surely raise some eyebrows amongst purists, but the CD is nevertheless quite defensible. First, Tunnell is a trumpeter by trade – an unlikely crossover to be sure. I doubt that anyone listening to these tracks would be able to hear this, however, and Tunnell is to be commended for his ability to make such a difficult switch in physical technique and playing style without noticeable difficulty. Second and somewhat more noticeably, the sound he produces is not exactly quintessential horn; yet this is not because he is a trumpeter. Instead, it is because Tunnell performs on a valved corno da caccia recently designed by the Thein company in Bremen, Germany. The purpose of the instrument, as related in the liner notes, is to make difficult natural horn repertoire more accessible to the modern player. This is a situation not too different from that which created the modern piccolo trumpet, and the fact that the Thein instrument is shorter (i.e. higher pitched) than the original adds to this parallel.

In substituting a modern valved invention for the original valveless instrument, Tunnell will ruffle the feathers of many historical performance purists. This may be a reactionary tendency, as many modern performers do not feel as obliged to play on historical instruments as they did only a decade ago. The difference in hearing Tunnell’s valves is too subtle to be noticed on casual listening, but glaring to those of us used to hearing the natural horn: certain passages are impossibly crisp, other passages are just too well-tuned (even for a studio recording), even the consistency of tone from the instrument is somewhat odd to hear (there are no stopped notes after all). The result is a very listenable CD without all the potential distractions and drawbacks wrought by a valveless horn, but also a CD where the lack of these very distractions reminds you that what you are hearing is somewhat on the a-historical side of the performance spectrum.

Ten or twenty years ago at the height of the performance practice movement, Tunnell probably would not have made this recording at all and we would know nothing of these compositions whatsoever. In 2010 it is enough to say that the recordings are thoughtfully performed and present evidence of the weakening grip that historically informed performance has on recordings of classical music. I (who never let go of my Glenn Gould recordings of Bach) would much rather hear something well (albeit-inauthentically) played than yet another dry-but-authentic release.