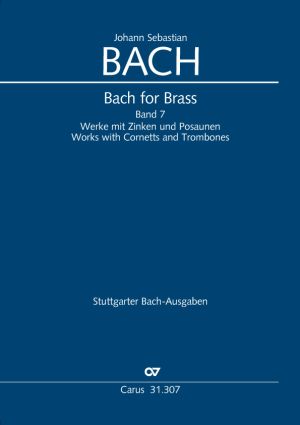 Bach for Brass 7: Cantatas and Mass Movements with Cornetts and Trombones is the final volume in a series of the complete brass parts to Bach’s orchestral music.This seventh volume, edited by Edward Tarr and Uwe Wolf, includes the cornett and trombone parts to the cantatas and mass movements. The short forward and remarks, written in German with English and French translations, makes the initial point that the twenty first century has seen the complete Bach oeuvre published in new editions (the Neue Bach-Ausgabe or NBA) which replaces the beloved but now dated Bach-Gesamtausgabe. Aesthetically the volume is very pleasing. Handsomely bound and engraved, these short scores offer a practical guide to practice and performance. The handful of facsimile pages from original performance parts that are included add to the aesthetic pleasure of the volume.

These seven volumes of brass parts replace an earlier collection of cornet and trombone parts based on the NBA, but presented only in separate parts and only in “chamber” pitch. This new volume includes many practical features for performance and study, including timpani parts, instrumental and vocal cues, bar numbers, and vocal text.  Many of the works are also given in “choir pitch” as well as in concert pitch to accommodate different performance situations. In Bach’s Leipzig the old choir pitch, or Chorton, was a whole tone higher (a = 466) than the newer Baroque chamber pitch or Kammerton (a = 415), and the editors, in keeping with their commitment to original performance practice, suggest that “choir pitch should be favored, because Bach’s trombonists played from such parts.” Performers on modern instruments (a = 440) tend to refer to chamber pitch.

As this quote might indicate, despite all these practical elements, this is still a scholarly volume at heart, even if it wears it lightly. The edition is meant to provide primary textual material, and does not include phrasing or performance suggestions other than those found in the original parts or autographed scores. Editorial additions are sparse, are based on the original markings, and follow the practice of giving them only with the first appearance of a motive, leaving it up to the musician to adopt the style in subsequent repetitions. In the common case when there are no original parts to consult, articulation markings have been left out entirely. The claim that the parts are taken “from the original” perhaps makes the editing choices sound less complicated than they actually are.  Editors must constantly negotiate complex questions: What constitutes an “original?” What does one do in the common case of discrepancies? What is intentional, what is a mistake, and whose hand do we trust?  There are whole schools of thought devoted to the study of textual stability and instability in the arenas of production and reproduction, and for those looking to explore the questions of textual scholarship in Bach’s brass parts, this volume is just a beginning.

On the other hand, for the student or performer looking to do more than just study the notes, the volume also offers much more than the standard orchestral parts in terms of information on sources, variants, composition dates, and original instrumentation. While the editing is offered with a light touch, we do get a very occasional comment on variants such as “here a half note on d’” or “the natural appears in the original part before the 2nd note.” The edition, then, strikes a useful balance between the practical and scholarly, and it will certainly be an invaluable resource for study, practice, and performance by early music brass players. Last, but certainly not least, since the parts are often presented in pairs (trombone I and II, etc.), it also will function as a really enjoyable duet book for trumpet and trombone players who just want to play some great music.