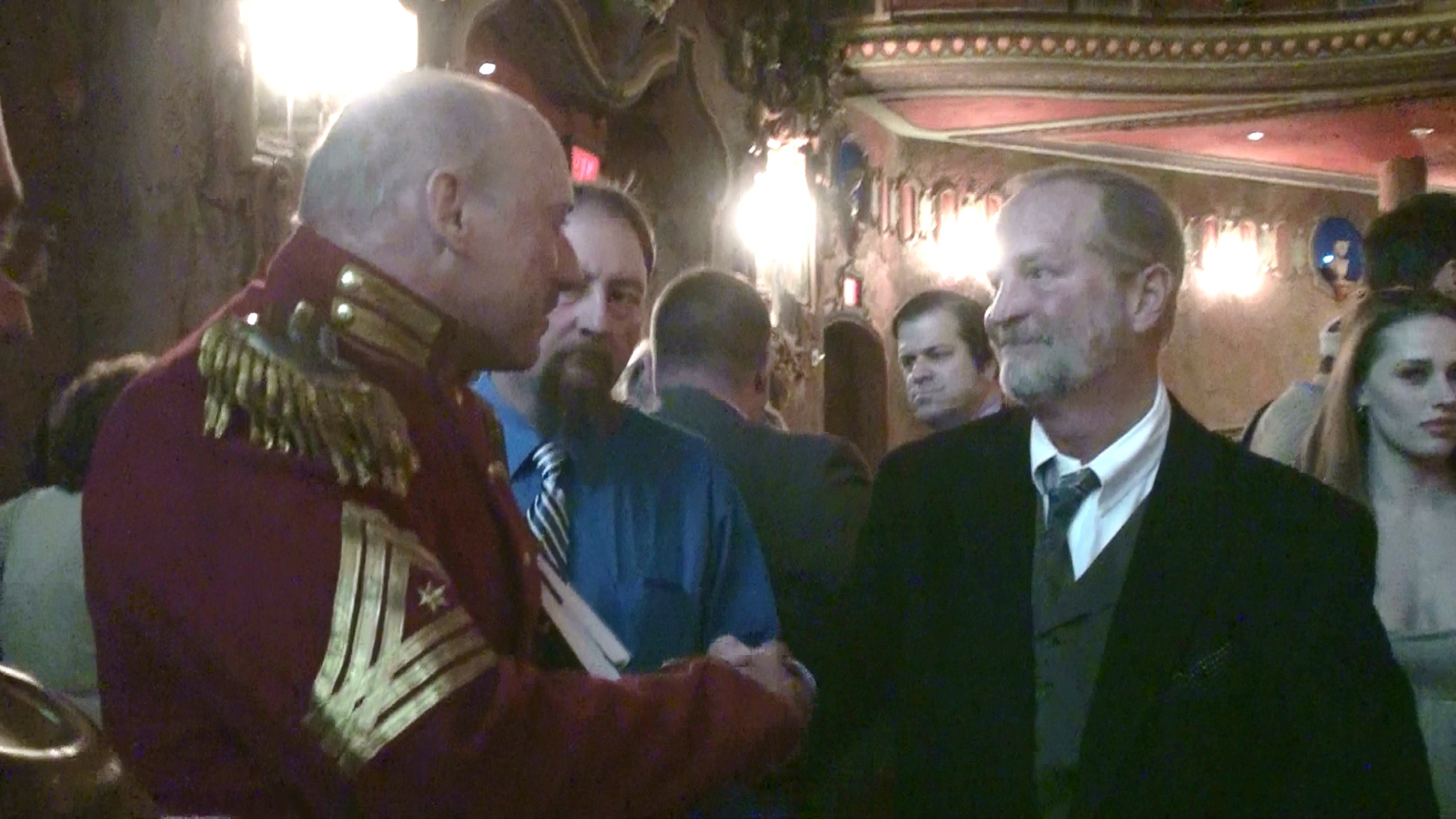 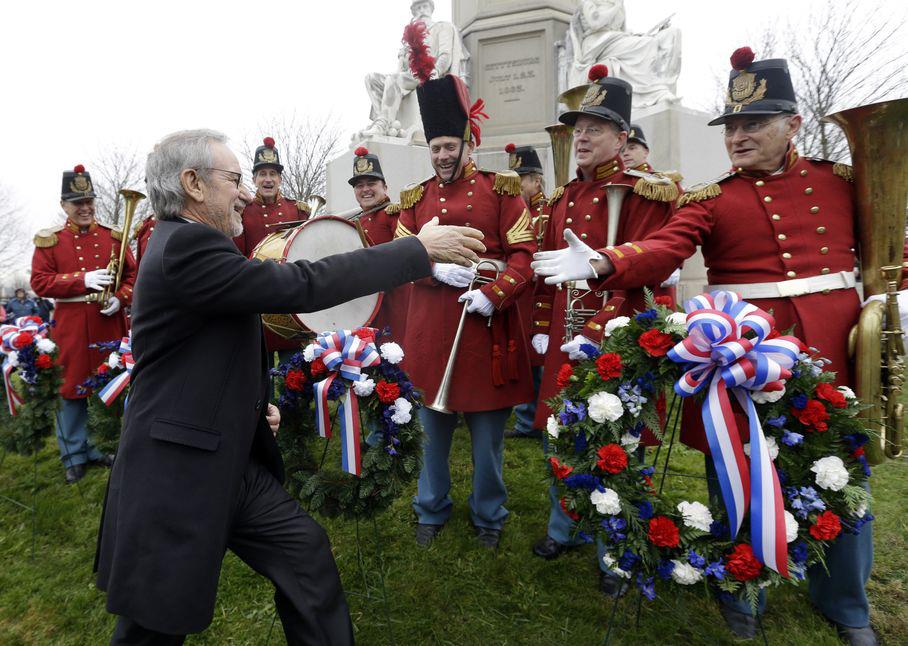 When the movie “Lincoln” was in the works Stephen Spielberg wanted a band to play in the movie. Of course there are lots of civil war bands out there. So Dreamworks contacted Chris Johnston who is a person that has done lots of documentaries in the Richmond, Virginia area and asked him if he could find a band using civil war era instruments. There was also hope that the band would play well enough to be recorded live on the set. This had never been done before. At the same time it appears as though Dreamworks or someone else in CA. was doing their homework about civil war bands. The people in California were leaning towards the 1st Brigade Band.

Chris kept asking around about civil war bands and Mark Elrod's name kept coming up because of his huge collection of civil war instruments. Mark and Chris worked together for a while and Mark saw that there was a E-flat cornet solo. Mark told Chris he should get me to play the E-flat cornet solo. Chris kept looking around at other bands. One was even a band I play in “Federal City Brass Band.” Eventually both Chris and Mark asked if I could put together the rest of the band using Kentucky Baroque Trumpets and other people that I knew.

This seemed to make up their minds in California. People looked at the Kentucky Baroque Trumpet website, our credentials, and the quality of the musicians and decided we were the ones that would be in the movie Lincoln. I feel like the logistics probably also played a part. Chris and Mark turned over all control to me as far as the musicians were concerned but there were a few exceptions I had to agree too. We spent 3 days in Richmond for uniforms, makeup, etc. and filmed for 3 hours for a very short amount of time in the movie. I’ll never forget the morning we met Spielberg. He said “Hey guys. It’s cold. [It was about 30 degrees]. Nice to meet you. Let's hear the solo and chorus.” Wow, talk about pressure – we nailed it. Afterwards Stephen said “Who needs the rest of the chorus. You guys are great!” Our soundtrack was used in the movie. We are the first band to record live without a click track. You can’t see me playing the solo, but when the chorus is singing that is me on E-flat cornet.
When we were done I talked to the costume supervisor and told him I would like to purchase the uniforms. He told me they would go into storage for 1 year until the movie was released. I emailed him several weeks later and told him not to forget me when the uniforms were available. He asked me where he should have them shipped!! I told him I would pick them up. I drove back to Richmond to get the uniforms. The price was later negotiated. I did have to pay a fair amount for them.

Later that year an employee for Dreamworks recommended us to National Geographic when they wanted to use a band in “Killing Lincoln.” The budget for National Geographic's movie was surprising low. They wanted less players because of pay. It was still another great experience and we got to meet the director Adrian Moat, screen writer Erik Jendresen, and actor Jessie Johnson. Jessie plays John Wilkes Booth in the movie and he is the son of Don Johnson of Miami Vice. We got some laughs out of that one.

In November that year we were able to play at Gettysburg for Dedication Day and Stephen Spielberg and Doris Kearns Goodwin were the featured speakers. Stephen agreed to have a photo with the band at the National Monument. It was unbelievable how many cameras were clicking. Within 4 hours President Lincoln's Own Band was seen and heard by millions around the world. The Associated Press took a photo which went all over the world. We saw video clips of us performing on many television stations around the country.

In December a very high ranking person at the Smithsonian happened to see us on a person's Facebook page. It was us at Gettysburg with Spielberg. He emailed the person and said “Who is this group and how can we get them here to play for the Presidential Inauguration Festivities.” This is kind of humorous to me now because we almost lost the gig because of a bad cell phone: I could not receive voice mails because it would crash several times a day. I did get a new phone a week later. I heard my voice messages and realized what I had missed. I called and left a message telling them I was sorry for the delay. The Smithsonian calls back and says we are first priority on their list. If we are available they want President Lincoln’s Own Band. Of course we did the gig.
We recently performed for the Premier of “Killing Lincoln” in Richmond. This was probably the largest premier in the nation. Richmond was where the movie was made. After our performance I was able to again see the Director, Screen Writer, and Jessie Jackson. The Screen Writer and Director, Erik and Adrian, want to use us again and in a much bigger way. Especially after hearing us perform.

I am working on the possibility another documentary. I've uncovered a huge amount of history about the first casualty in the civil war with ties to Ky. The story is really amazing including murders.

Our time is very short in both movies. We are still honored to have been a part of each movie. The movie is about Lincoln, not about a civil war band. “President Lincoln’s Own” is still getting calls to perform. We are scheduled to perform at the New York Metropolitan Museum of Art in June. We are also their first choice!

"PLOB" portrays the US Marine Band of the civil war era, not a regimental band. People interested in using us should note the difference in the two. There should be no competition with any regimental civil war band. Please check us out on Facebook and on our homepage.