An Interview with Instrument Maker and Restorer Robb Stewart 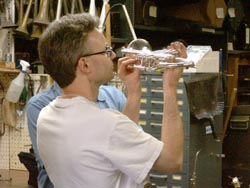 The following interview is based on a visit with Robb Stewart in his workshop and home in Arcadia, California, in May 2005, and some emails in the fall of 2006. Robb is one of the foremost brass instrument makers, restorers and dealers of vintage instruments in the United States. If you have a vintage brass instrument that needs repair or restoration, Robb is the person to go. His expertise will help you assess or date your instruments, and his meticulous work is rarely found elsewhere.

Sabine Klaus: When I visited your workshop in beautiful Arcadia, California with a group of cornet-enthusiasts in May 2005, I immediately realized that they all couldn't do without you. Their vintage horns simply wouldn't play like they do, if they hadn't gone through your hands. All these cornet players and collectors are incredibly grateful for your work. They would show you their instruments and seek advice on what to do with leaks or stuck valves, how to get the dents out of a bell, and how to transform a battered old horn into a beautiful great player again. How did you become the leading expert and restorer in 19th and 20th vintage brass instruments in the US?

Robb Stewart: I had interest in old and unusual brass instruments early on. I would look for books on musical instrument in the library and go through the big books of patents looking for brass instruments as well as cars and airplanes.

SK: Where did you grow up and go to school?

RS: I was born in Chicago and grew up mostly in rural northern Illinois. I started playing the cornet in the 5th grade band. I continued playing in the school bands all through school and became very serious about being a 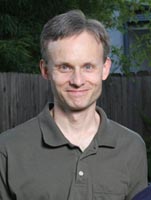 trumpet player, although I never had any private lessons. Moving to California and playing in several honor bands and orchestras opened my eyes to what a long way I had to go to become a good player. While a senior in high school (1976), I started attending a repair class set up at Fullerton High School. The teacher, Don Heaston, got me a job at Bartold Music in Woodland Hills CA in 1977. Norm Bartold was quite a character and had a large collection of antique instruments hanging in his shop. I would occasionally work on these and Norm suggested that I reassemble used parts to appear as some of these antiques to be sold as replicas. I worked there for two years and started my own business in 1979. Norm continued to encourage me to make instruments and by 1981, I had enough new parts around to make a replica over the shoulder Eb cornet. Word of this got out and I sold this to the 11th North Carolina Regimental Band. They asked me to make an Eb tuba next.

SK: How did you go about setting up your own workshop?

RS: Norm Bartold was closing his shop and I needed a job. I set up a shop in a two-car garage and continued to get work from many of the same customers. Larry Minick, who was the best repairman in town at the time, would send customers to me that he didn't have time for. More importantly, Larry was always willing to give advice and scold me when I really messed up.

SK: How do you develop your models?

RS: I tooled up to make Eb keyed bugles in 1983 which involved making the bells and keys in my shop. I now make Bb keyed bugles as well and have made them in copper, nickel silver and Sterling Silver. I have improved my instruments over the years and have made over 250 to date. I have made many different designs that customers have asked for, including cornets with bells forward, upright, over the shoulder and circular. Also ophicleides in C soprano to Eb contrabass, "English" bass horns, an orchestral F trumpet, post horns, coach horns and English hunting horns in Sterling Silver. This has always been an adjunct to the more profitable repair business and I have always had call for customizing modern instruments as well. Some of my favorites are double tubas in F and CC for Tommy Johnson and the Fluba (flugelhorn shaped tuba) and Selfphone (baby sousaphone in F) for Jim Self. As much as Los Angeles is an entertainment capitol, there are not enough professional brass instrument players to keep a repair shop busy full time.

SK: When you make vintage instruments how faithful are your copies? Do you copy the original in every detail, including possible design flaws, or do you make some sensible changes and "improve" the original somewhat?

RS: I copy the originals as closely as it is practical to do. I have rotary valves made to my size specifications, but I can't make exact copies and still be able to sell them for a profit. I recently made a copy of a Graves circular Eb cornet as an exercise in getting as close to the original as possible and to have an example in my collection. If I were making this for a customer, I would have to charge more than double what I normally charge for a cornet. I don't see any need for improvement of the best instruments made 150 years ago and I wish that I could make mine exactly like them. Original keyed brass instruments vary to a surprising degree and I believe that I have been fairly successful in getting mine to play as well as some of the better originals.

SK: Have you ever gotten a commission from a composer to develop a new instrument, say in the way Richard Wagner influenced the brass design of his time?

RS: My biggest passion has always been history of brass instrument makers and restoring and preserving antique brass instruments. I find it the most satisfying work and I believe that it is my greatest strength. I feel that it is very important to reproduce missing parts to appear exactly like the original. When a part looks wrong or the instrument has other sloppy workmanship like parts mounted wrongly, this becomes the focus of the instrument, rather than the beauty of the design or the historical importance.

SK: In the Joe and Joella Utley Collection we have both, new instruments made by you and historic ones which you repaired and restored. I have been impressed by the high standard of workmanship of both. When you replace a part it is hard to distinguish it from the original just by looking at it. However, you do something that I have appreciated very much; you stamp the new part with your initials. How did you get acquainted with common conservation practices that preserve an instrument not only in its playing qualities, but also as a historical document?

RS: I have worked for several museums, but mostly for individual players and collectors. I have learned some things from museum people, but preservation is mostly common sense. I try to make good judgments regarding historical importance of particular instruments and how to deal with a damaged or missing part. There has been a growing interest in history during my whole career and in the last five to ten years the interest in 19th century brass instruments is booming.

SK: I was amazed seeing your home. You and your family live in a museum, which you created yourself. How did this come about?

RS: In 1986 Nancy and I really wanted a beautiful old Crafstman style house and Monrovia was more affordable than most of Southern California. We couldn't afford anything 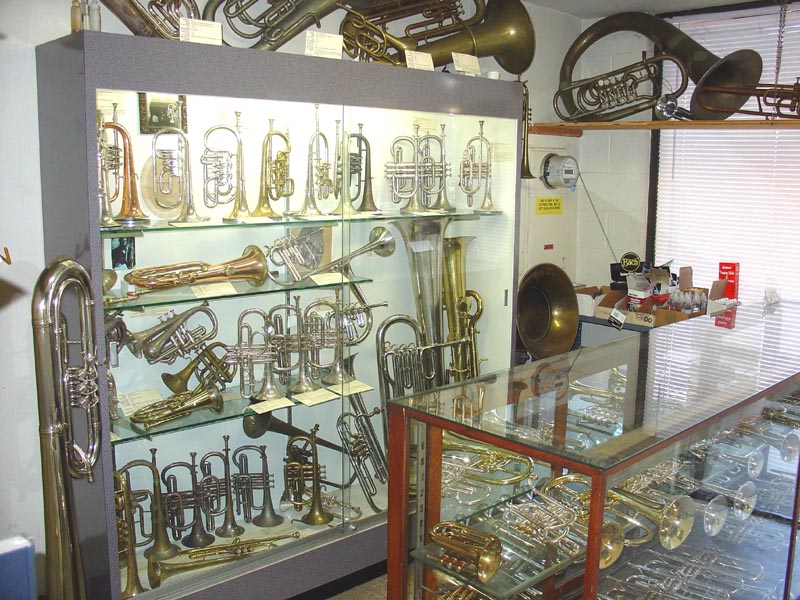 really nice, so we bought the neighborhood eyesore and spent the next twelve years fixing and restoring it. It was the same with furniture. We bought a few nice pieces but prices were escalating and I found that I could better furnish the house if I built exactly what we wanted.

SK: When we visited, we all got a ride around the block in your beautifully restored 1912 Hupmobile. Is this hobby related to your interest in brass instruments?

RS: It's the same fascination with industrial history. I could make a hobby of any old mechanical object and its history. I've had a passion for old cars since I was a child and it's safe to say that I'll never be able to afford to get into antique airplanes! The next time that you visit, I hope to have the EMF (restoration project car) ready to take a spin.

SK: Present day 19th and early-20th-century brass music revival in the United States owes you much. Many of the vintage bands couldn't play without your work. How does it feel to occupy such a key role in this revival movement?

RS: I do feel very fortunate to be able to make a living while at the same time creating something. Even though the restoration projects are the creation of craftsmen more than 100 years ago, I feel that they are now a part of my legacy as I am part of theirs. In most cases these instruments will receive better care in the coming centuries than they have had in the last one. I try to educate my customers in the importance of preserving history rather than just hoarding trinkets. In the future there will be fewer historically important instruments damaged for the sake of display. 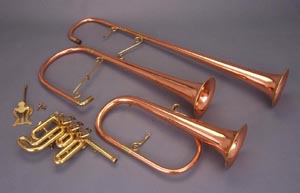 The Robb Stewart "Three in One" 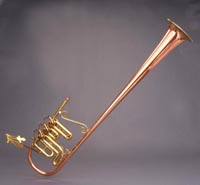