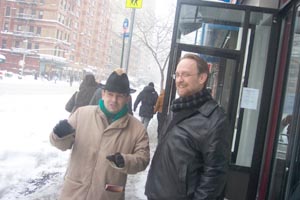 Jean-François Madeuf was in New York performing Handel's Hercules with Les Arts Florissants on both natural trumpet and horn. Madeuf is a leading player of the natural trumpet in a historically informed manner without the use of modern compromises, particularly the use of vent holes. He performs with many early music ensembles throughout Europe and teaches trumpet at the Schola Cantorum in Basel and at the Conservatoire Supérieur de Musique in Lyon. Madeuf also leads a trumpets-and-kettledrums ensemble as well as a nineteenth-century period instrument brass ensemble.

Krin Gabbard is an Associate Professor of comparative literature at Stony Brook University, SUNY and the author of many articles on jazz history. He is currently writing a book for Farrar Strauss on the cultural history of the trumpet. He is also a trumpet player.

Krin Gabbard: We've been talking about performance practice-natural trumpets and compromise vented instruments. What are the most glaring differences between the two types of instruments?

J-F Madeuf: The sound, the tonal quality and also the kind of articulations that one can get on both instruments. Compromise trumpets with modern tubing, modern mouthpiece and tapered lead pipes won't give you the sound of a real natural trumpet of the baroque. The attacks have a tendency to be much sharper and brighter as they are on a modern valved instrument. A natural trumpet allows you to better develop the full range of articulations that are described in many performance manuals of the time, and there are many more varied articulations than modern players commonly use today.

KG: What was the most difficult thing for you to do in mastering the natural trumpet?

J-FM: Accepting the fact that it takes a very long time! We live in a world where we want things immediately and the most easily as possible, so it's hard to accept that some things take hard work over a very long period of time before having a result.

Jeff Nussbaum: As you know, we are planning to present another conference in Paris, and Benny Sluchin is heading an HBS committee and talking to the people at the Cité de la Musique. The theme will involve the importance of Paris in brass making, performance, pedagogy, composition, and theory during the period from about 1840 to 1920. The advent of modernism will be a central theme. We hope to have period-instrument performances of chamber works of that period. Fortunately there are a number of great instrument collections there from which we might be able to draw from in order to do works by Stravinsky, Ravel, and others. I know that you are active with a nineteenth-century period brass ensemble as well as your earlier interests.

J-FM: That's a good starting date. It's around the time Sax arrived in Paris. It was a fascinating period. Natural horns and trumpets were used along with the newer valved instruments. Much of the repertoire was limited, particularly some of the military music, but it is still a repertoire of some interest that has not been explored. After that early period of brass bands, wind bands with woodwinds came more into use.

JN: It's fascinating to see how quickly those innovations in brass manufacture and use in the repertoire came into the mainstream. It seems that because of the influence of a few important musicians those developments entered the Conservatoire, as well as the professional performance sphere.

J-FM: Berlioz was such a person. I've read a lot about him and his music in the last few years. What is not so well known are the developments in military and popular brass music. For instance, much has been written about the British brass band tradition but not much has been researched and written about a very similar tradition that took place in France. I hope the HBS Conference in Paris will be able to explore that. I found a great deal of this repertoire in the Bibliothèque Nationale in Paris. It is interesting to notice that most of this music was not yet microfilmed but could only be viewed in the original printed parts. This means that no one in modern times has ever looked at that music because whenever anyone requests music, it would be automatically microfilmed!

J-FM: It's largely not by great composers, nor are the works real masterpieces. However, it is often well-written music for brass, often military music, that deserves attention. Some times there are poor arrangements of opera music but other times I've found some wonderful works.

JN: Is there a standard instrumentation?

J-FM: Yes. Mostly they are scored for 36 brass instruments but in an effort to promote his instruments, Sax organized concerts at his workshop with arrangements of these works for a brass ensemble of 10 to 15 players. He got the best brass players in Paris, and we actually know who they were. I have adapted a program with my ensemble, Les Cuivres Romantiques, of this repertoire. We perform on original instruments, which ironically are easier to obtain than copies of nineteenth-century brass instruments. We plan to do a concert at a festival in France this summer and perhaps we will make a recording of this music.

JN: I've viewed your DVD Autour de Hector Berlioz and I think it's fabulous. I should let people know they can get more information on your website www.cuivresromantiques.com.

J-FM: Thanks. We are looking forward to doing this performance at the HBS conference in Paris and I look forward to many lectures on this topic. I've looked at many nineteenth-century French journals in my efforts at understanding this music better. 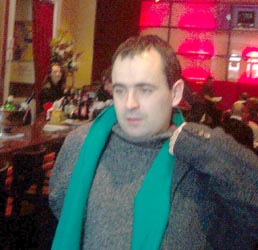 JN: As a teacher in Lyon and Basel what is your view of the younger generation regarding interest in understanding the history of brass music?

J-FM: People interested in baroque trumpet, specifically to play in an original way, are not so young and are soon professional players on the baroque trumpet (with holes) but it changes and younger players are coming by now. I've been encouraged by the interest from a new generation of brass players in researching and understanding performance practice issues in nineteenth-century brass as well as in earlier periods. David Guerrier is a prime example. He plays both trumpet and horn brilliantly and is one of the best brass players in France and in the world. David won five international prizes between the ages of 15 and 20, including the Maurice Andre Prize. He studied natural trumpet with me. He doesn't play it too much now but he is more active in nineteenth-century period brass performance. A number of players in this circle also play period instruments, both nineteenth-century and earlier, and are also very interested in the historical end of things. Because David is such a well-respected modern brass player, his interest in early brass will help break the false idea that playing old and modern brass instruments can't be done. People will certainly think, "If David Guerrier is doing it, I should too." It is very positive for the ancient music field!

JN: That is encouraging. I must say it runs contrary to my experience with younger brass players, although I've seen other encouraging activities with the cornetto and horn players in France. You must put me in touch with some of those musicians.

J-FM: We also have players in France who just want to do early music because they think they'll make extra money and have no real interest in understanding the music!

KG: It's great to hear of this interest in nineteenth-century brass music in France. It's going to tie in with the upcoming HBS conference at the Cité de la Musique that focuses on Paris and the musical and cultural developments from the mid-nineteenth century that led to modernism. So many important topics can be discussed in an interdisciplinary fashion, including Stravinsky, Picasso, and the reception of early jazz music. The art and literature of high culture quickly gives way to of popular culture. If you look closely, the reception of brass music is related. Bernard Gendron from the University of Wisconsin at Milwaukee has written a fascinating book, Between Montmartre to the Mudd Club that deals with how various types of popular music were, at some point, declared to be art. He begins with cabaret songs in France and moves on to early jazz. Someone like Gendron should be involved because he could expand the scope of the discussion. I'm personally excited about it because it ties in with my interests in early jazz history. Some of the first critics to take jazz seriously as an art form were centered in Paris. The first extensive jazz discography was done by a Frenchman, Charles Delaunay, the son of Robert Delaunay.

Jean-François, on another topic, what is the worst thing that has happened to you as a brass player?

J-FM: I had to overcome some poor advice from my early teachers. When I was a teenager I had to completely change my embouchure. Everything was wrong including my breathing and mouthpiece placement. As I started to play more difficult music I completely destroyed my embouchure and where I studied in Clermont-Ferrand, which is in the center of France, there was nobody to help me. I read a number of books on brass playing, including Farkas, and kept trying to develop on my own. I began to study other subjects including art history, but ultimately I improved and entered at the Conservatoire Supérieur de Musique in Lyon where I had a very good trumpet teacher and nice man, Pierre Dutot. My brother Laurent studied trombone there at the same time with famous player Michel Becquet as well as my other brother Pierre-Yves who a few years later studied horn with Michel Garcin Marou. Because of my early difficulties with the trumpet my parents didn't think I'd be able to a [attain a] high professional position but might become a music teacher somewhere. I ultimately did play in a symphony orchestra in Nice but I felt that the conservative atmosphere was not to my liking, so I left this very comfortable position after three seasons. Before that I went to Jean-Pierre Canihac in Lyon and studied baroque trumpet with him because my first project to do it with Edward Tarr in Basel couldn't be practical at all with my job in Nice. I didn't have other teachers after that except colleagues who played with me and from whom I learned a lot. It took me a long time to get to play the music I now play.

JN: At your gig in Brooklyn are you playing with holes?

J-FM: I never play with holes. I only did that when I was beginning to learn this very difficult (but so wonderful) instrument!