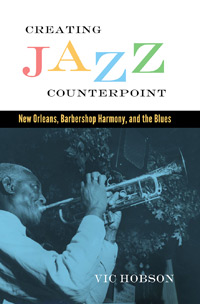 In November, 2005 the Historic Brass Society presented a conference in collaboration with the Institute of Jazz Studies at Rutgers University, “Early Twentieth-Century Brass Idioms: Art, Jazz, and Other Popular Traditions”. At that conference Vic Hobson presented an intriguing paper, “The Blues and the Uptown Brass Bands of New Orleans.” That paper was subsequently published in a Conference Proceedings by Scarecrow Press in 2009. It also served as the impetus for this present book.

In this excellent book, Hobson examines early New Orleans jazz with a number of new and fascinating perspectives. Through a fellowship, Hobson was able to extensively examine the Papers of Frederic Ramsey Jr. and gain access to much of Ramsey’s research notes as well as those of the noted jazz historian, Bill Russell. While some of that material is not unknown to jazz scholars, Hobson has been able to bring forth some rather new ideas for which he presents a very strong argument. Through his examination of early jazz brass players such as Buddy Bolden, Kid Ory, and Bunk Johnson, Hobson is able to formulate some convincing arguments about early New Orleans jazz and the influence of barbershop harmony and the blues on that music. He describes in both historical and musical terms how the practices of quartet singing were converted to instrumental jazz. Hobson also presents a solid argument that Bunk Johnson did, in fact, play with Bolden, a point previously held in question. Having recordings of a musician who played with and was influenced by Bolden is a significant bit of information in which we may get a better grasp of how Bolden may have actually played.

Hobson also revealed more information that indicates that Bolden did, in fact, make a recording, who was in the possession of that recording and, unfortunately, was tossed in the trash. Musical analysis of early tunes, several of which were attributed to Bolden or were in Bolden’s repertoire, clearly shows the importance of the “barbershop chord” (flatted 6th degree of the scale) and its clear relationship to the blues and implied blues harmony. His detailed historical investigation of vocal quartet involvement by numerous jazz greats links their familiarity with that genre and the development of blues. Given our modern “white bread,” Disney Land associations we have with Barbershop quartet singing, it might not immediately spring to mind as the sort of music that influenced the development of the blues. However, this genre in the late 19th and early 20th century was very much a vibrant aspect of Black musical culture. Hobson’s musical analysis presents a strong case for his thesis.

Since Vic Hobson’s initial paper presented at the HBS conference was the formative basis for this book, it was surprising not to find any reference to one of the most fascinating conjectures he makes in that earlier paper. The conventional wisdom is that the blues came to us from the guitar playing share croppers and poor Blacks of the Mississippi Delta region. Hobson made the brilliant point that at the time when that might have occurred, guitars were not yet mass produced in this country and cheaply sold by retailers such as Sears Roebuck and others. The price of guitars would have still been beyond the reach of poor Black musicians. Hobson presented the possibility that brass bands were more central to the development of the blues. Perhaps Vic Hobson has reconsidered that intriguing argument. That is a small issue and there is much new information and new perspectives in this wonderful book that gives us a fuller view of those great early brass players and the New Orleans sound in which they lived.