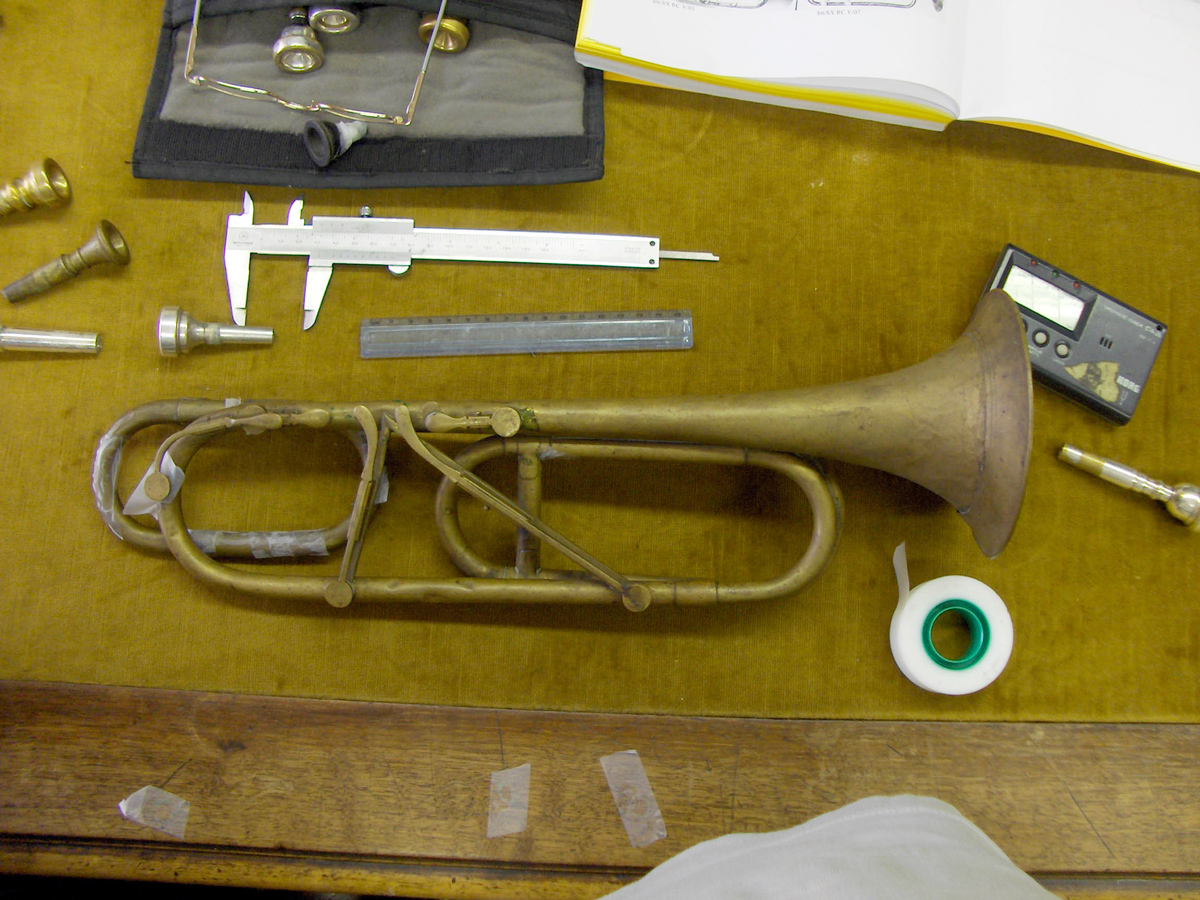 Over the past decade our knowledge of brass instruments in the nineteenth century has come into focus by leaps and bounds. While earlier work fixated on a few major figures—in the trumpet realm for instance the Anton Weidinger circle in Austria and the F. G. A. Dauverné circle in France—to the point of exhaustion, today a new generation of scholars together with a virtual second wind among the older generation now offers breadth and depth

on a striking variety of composers, performers, instrument builders, and locales. The present book exemplifies the best traits of brass scholarship’s coming-of-age and undoubtedly portends great things for the future of historic research on brass instruments.

The core of this essay collection derives from a February 2009 conference on the keyed trumpet held in Bern, Switzerland and a follow-up symposium on the broader topic of brass in the nineteenth century held in the same city in October 2010. There are fifteen essays in all, some retaining their shorter conference presentation size and some enlarged significantly. As might be expected given the trumpet-centric nature of the initial conference, the trumpet occupies more than two thirds of the book’s space. Fourteen of the essays are in German and only one in English, potentially a serious barrier for some HBS readers. In what follows I will attempt to provide a precis of the essays while discussing their quality.

The book commences with Reine Dahlqvist’s investigation of the trumpet as a solo instrument in Vienna during the first three decades of the nineteenth century. It is not quite on Weidinger as might be assumed. Actually he invests a good deal of effort on the eighteenth century as an introduction: a nice diversion given that so much is already known about the later years compared to the earlier ones. He argues that there was no “crisis” in trumpet playing (attacking the oft-repeated trope on the decline of the art of the clarino player after 1750) and that the overall quality of the performers remained high in Vienna. Some of his musical examples back up this interpretation, though his post-1750 examples are weaker than he is ready to admit. For the 1800s Dahlqvist briefly covers Anton Weidinger’s interactions with Haydn and Hummel before moving on to the less-explored later career of Weidinger. These were the years during which he moved from trumpet to keyed horn, playing and developing that instrument together with his son Joseph. The closing pages move to uncharted territory, examining the lives of Joseph Werner and Anton Khayll in a much needed expansion of Vienna’s musical environment apart from Weidinger.

Two later essays in the collection support Dahlqvist’s effort to dig deeper into the world of the Viennese keyed trumpet in the first half of the nineteenth century. Krisztián Kováts focuses on Joseph Felix Riedl. A keyed trumpet builder who flourished in the 1820s and 30s, Riedl provides an important link between known keyed trumpet building techniques and Anton Weidinger’s lost prototype. Jaroslav Rouček focuses on Johann Leopold Kunerth (1784–1865), the so-called “inventor of the keyed trumpet” (“der Erfinder der Klappentrompete” according to and 1850 statement by his student Andreas Nemetz). Kunerth was active in the same theaters as Weidinger around 1801 and was an important composer for the instrument over the course of his long career. His 600 trumpet duets (written in the 1840s), numerous other works for keyed and valved brass, and his technical improvements to keyed trumpet models in the early years of the the century, make Nemetz’s claim plausible in spirit if not in fact.

Roland Callmar’s essay might be thought of a pre-history to these opening essays. He discusses the use of stopping techniques and the “inventions trumpet” (the curved trumpet that allowed for stopping) in France during the 1770s and 1780s. To me the more interesting part of the essay was the second half, where Callmar investigates the development of the trumpet ensemble (military and otherwise) from ca. 1750 to ca. 1830. He examines surviving repertoire and instrumentation over much of Europe, noting composers’ ever-increasing inclusion of chromatic trumpets alongside their natural counterparts.

Martin Skamletz’s essay on quotation and plagiarism in Hummel’s Trumpet Concerto opens by hitting home: taking up a challenge I made in a 2013 review of Edward H. Tarr’s facsimile to better prove that the composer was indeed consciously reusing material taken form Cherubini’s opera Les deux journées. Tarr defended himself in my International Trumpet Guild Journal column in 2014 and here Skamletz expands upon that defense by bringing specific connections to bear, indexed measure for measure in a table. I am happy to say that I am far less skeptical that the connections were intentional having read his essay. On the other hand I have a new problem, which perhaps could be a challenge for Skamletz’s next paper: is there a deeper meaning or significance? Hummel has been caught red handed, however the problem remains that Hummel merely steals Cherubini’s underlying chord progression and accompanimental gestures—and then only from the finale of Act II at that—while his solo trumpet line is newly composed. So a theft has occurred of about 40 measures of chords, accompanimental figures, and orchestration techniques (and there are other works where Hummel does this too as noted by Skamletz). What now? In the meantime, we know more about Hummel as a composer, which is a striking positive.

The collection includes much beyond the confines of Vienna of course, and Italy in general—especially Milan—clearly emerges as an important center for brass music in the era. Adrian von Steiger’s contribution presents the eagle’s eye view, surveying as it does the lives and work of the five keyed trumpet method writers in the 1820s and 30s in newfound detail. Two of his writers were based in Milan, one in Napels, and one additional translation appeared in Bologna. The most striking element here is that only one author (Giuseppe Araldi) was an actual trumpet player! Eugène Roy, author of the most widely published and translated method for the keyed trumpet and the focal point for much of Steiger’s text, actually played flageolet. This research expands upon Steiger’s research as presented in his facsimile of Roy’s method (Editions BIM, 2009).

Francesco Carreras and Cinzia Meroni co-authored the only English-language essay in the collection, a study of brass instrument makers in Milan from 1800–1850. The date range they give is somewhat misleading in that much of the essay delves into the late seventeenth century and that there are a number of large gaps in the records they examine. The authors have scoured Milanese archives for documents, finding what survives to be found (and have thoughtfully included some really well-done facsimiles for the reader). The documents have helped them set up a framework for future research on Milan, including the identification of a number of instrument makers and players not previously known. Hopefully enough additional material will come to light in the future to expand upon this beginning.

Claudio Bacciagaluippi examines the same city and time as Carreras and Meroni, but chooses to focus instead on the city’s major institution: La Scala. Bacciagaluippi has assembled a credible study that should spur further research. True, the names of the trumpeters and hornists he examines are unknowns save perhaps Araldi (see above), but there is more to the article than discerning forgotten musicians. Part of the work is sociological, figuring out the changing social status of the musicians. Part of his work is on related institutions—the conservatory—and their interaction and influences on one another. Technology also plays an important role, as might be expected given the previous two essays. The appendices documenting primary sources are an added and important bonus. Renato Meucci’s chapter on the cimbasso’s use in Italian orchestras provides a convenient complement to Bacciagaluippi’s study, with a foucs on low brass. Meucci includes La Scala in his research as a starting point before branching out to other Italian orchestral institutions.

Any scholar of trumpet history will naturally be drawn to three essays near the end of the collection, if only because of the authors: Sabine K. Klaus, Edward H. Tarr, and Rainer Egger. None of them disappoint. English technological approaches to the trumpet have been well studied insofar as the slide trumpet is concerned, but Klaus calls our attention to the otherwise unknown world of the keyed trumpet in England. Her study includes acoustical analyses (graphs, etc.) of three surviving instruments, and a number of very nicely reproduced full-color images. Tarr once again demonstrates his uncanny ability to unearth new figures in the history of the trumpet. This time he discusses Hugo Türpe, a late-nineteenth century cornet virtuoso who Tarr argues rivaled Jules Levy and who, among other things, toured the United States in the 1880s. I found his discussion of Türpe’s performances in Chicago and Milwaukee, as recorded in German-language newspapers, interesting both from a personal perspective (having grown up in Milwaukee) and a scholarly one (in the sense of the strongly defined Germanic culture of Wisconsin prior to World War I).

Egger’s essay, one of the shortest in the book, is nevertheless packed with technical acoustical analysis comparing the keyed trumpet to modern orchestral instruments. Readers unwilling to wade through the mathematics can rely on his two tables, which examine specific tendencies (how well one plays at soft and loud dynamics, ease of performing lip trills and staccatos, etc.) one by one with a short prose explanation. Markus Würsch’s essay provides the more practical counterpart to Egger’s more theoretical writing. Würsch discusses various practical challenges encountered when trying to play keyed trumpet repertoire on a historical (or reproduction) instrument: which instruments to use and what the implications are and so forth.

Only one essay in the collection address the horn in specific: Daniel Allenbach’s survey of valve horn playing in France during the first half of the nineteenth century. His essay revolves around Charles Gounod’s ca. 1839 method and the 1840 method written by Joseph-Émile Meifred. For low brass, beyond Meucci’s chapter on the cimbasso the collection includes only Martin Kirnbauer’s catalog of ophicleides (and some affiliated documents) housed in the Basel Museum of Music. Beyond the images of the instruments and their descriptions, Kirnbauer has included some witty historical cartoons and caricatures lampooning the “rude but marvelous” instrument.

Clearly scholars of trumpet history will want to at least peruse this book for future reference. Although one could argue that the trumpet is overrepresented in the collection, I am pleased to note over the summer of 2016 these same editors and the same publisher released a much larger volume of symposium papers that does have a wider scope and is more weighted towards the horn in particular. So good scholarship in brass history seems to have found a home in Edition Argus’s series. In summation, Claudio Bacciagaluppi and Martin Skamletz have collected a number of valuable essays that promise to fill some of the larger holes in our knowledge of brass instruments and their development across Europe during the long nineteenth century.